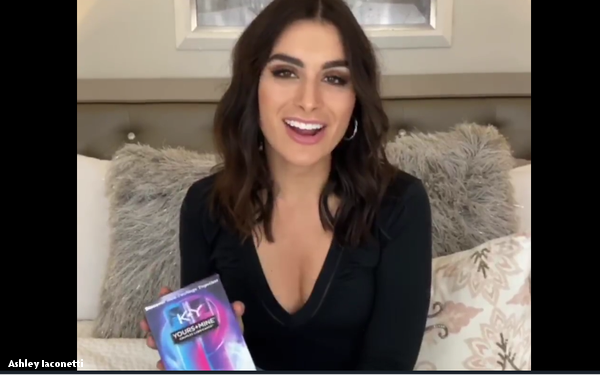 The selfie as a marketing tool is an obvious proof of consumer engagement — and what’s more, selfies are quick, easy and cheap.

Now, in a promotion pegged to Valentine’s Day,  K-Y lube is inviting women to post selfies of their “resting pleasured face” to K-Y’s Instagram account. The best one also wins the title of Chief Pleasure Officer for the brand, which claims to be “changing the dynamics of female sexual pleasure by redefining the role of lube in the bedroom.”

The “resting pleasured face,” or RPF,  is defined as “that post-sex glow. You know, that one you try to imitate with make-up,” according to an introductory video from  Ashley Iaconetti. She is a well-known contestant from season 19 of the ABC series, “The Bachelor” and spokeswoman for a campaign that is unfolding on the brand’s Instagram site.

In the video, she says she wants to introduce the RPF concept to the K-Y crowd.

The first 5,000 women to post their RPF receive free K-Y lube and are eligible for the Chief Pleasure Officer role. That winner, picked at random regardless of how pleasured she looks, gets a special collection of  K-Y, plus a monthly surprise package and beauty treatments and gift cards.

Lots of brands including Apple’s Beats, Reebok, Axe, Samsung and Purina all have enlisted consumers to contribute selfies. (In Purina’s case, it asked dog owners for dog selfies.)

But at a time during which some people are seriously pondering just how open of a book they want their life to be on social media, the RPF contest may create a little selfie interruptus.

The pretty standard rules say K-Y’s corporate parent owns the image and can do whatever it wants with it “in any media now known or hereafter developed, in perpetuity and throughout the world, without limitation,” without the user’s consent and further compensation.