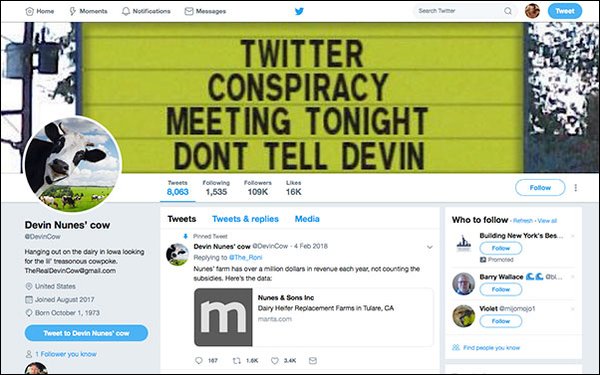 Twitter is urging a Virginia judge to dismiss a defamation lawsuit brought by California Representative Devin Nunes, arguing that it is immune from liability for material posted by users.

“Congress granted providers of online platforms like Twitter broad immunity from claims that seek to hold them liable for harms caused by defamatory or otherwise harmful content that appeared on the provider's platform, but were created by third parties,” Twitter writes in a motion filed this week in Henrico County Circuit Court.

The company is asking the judge to dismiss the case at an early stage, arguing that Section 230 of the Communications Decency Act not only shields web platforms from libel lawsuits, but also protects companies from the “burdens of litigation.”

The court battle dates to March, when the Republican lawmaker sued Twitter and three users -- including the anonymous creators of the parody accounts “Devin Nunes' Mom” and Devin Nunes' Cow” -- over insulting tweets. The other Twitter user named in the case, political consultant Liz Mair, was a Virginia resident.

Nunes, who is seeking $250 million, alleged that Twitter allowed its platform “to serve as a portal of defamation” as part of an anti-Republican bias.

One tweet by “Devin Nunes' Mom” referenced in the complaint reads: “@DevinNunes your district is looking for you? Are you trying to obstruct a federal investigation again? You come home right this instant or no more Minecraft!”

Numerous judges have ruled that Section 230 of the Communications Decency Act protects platforms like Twitter from defamation liability for content posted by users. Judges have also ruled that only false statements of verifiable facts can be defamatory, as opposed to opinions and hyperbole.

Last year, Twitter argued in a separate motion that Nunes filed the case in the wrong state. The company said Nunes -- himself a Twitter user -- agreed to bring any claims in California when he accepted the company's terms of service.