My Supermarket(s) Are In Danger 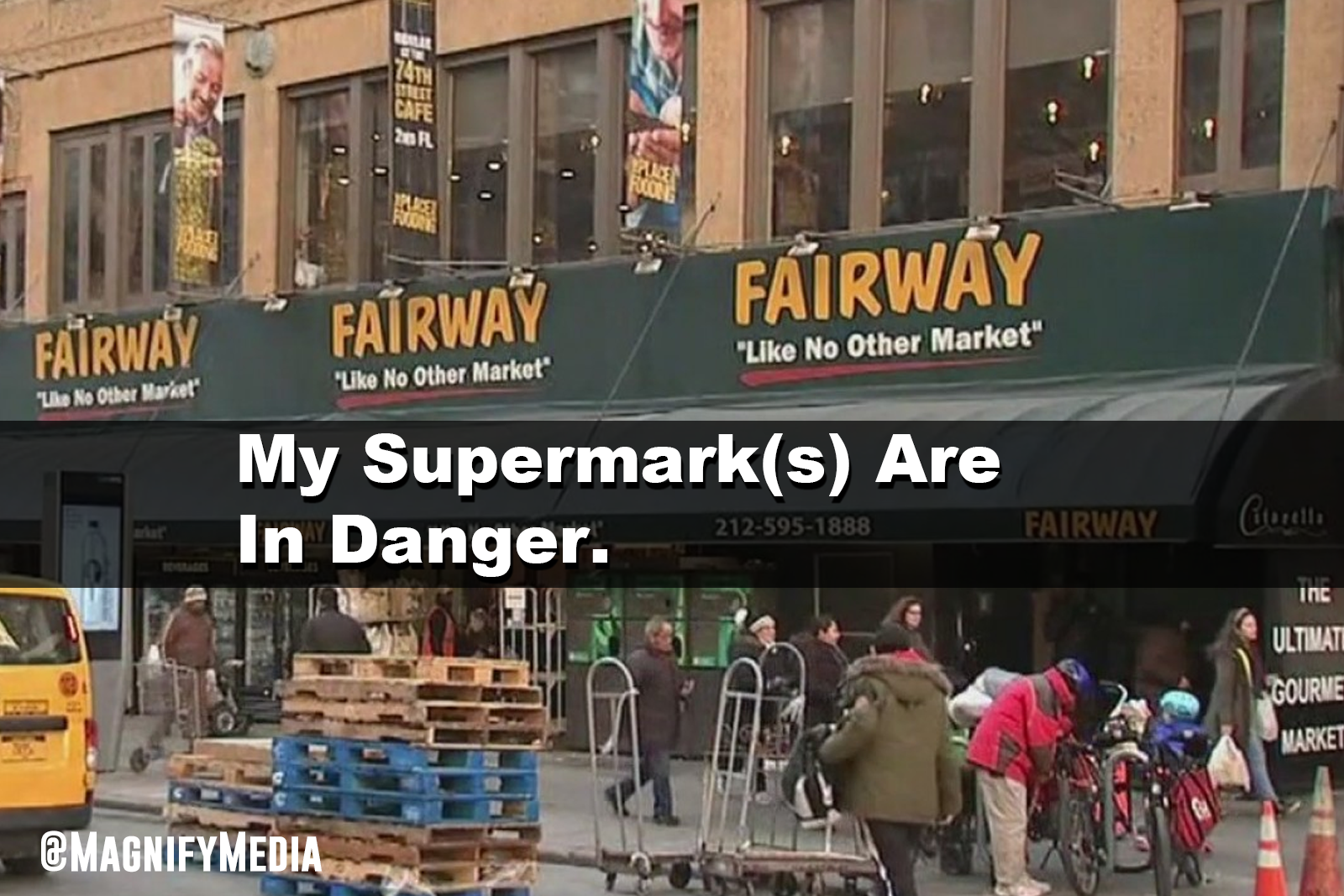 Last week it was reported that the supermarket chain Fairway would file for Chapter 11 bankruptcy.

The news seemed to be inevitable. The chain saw its stock hit new lows, from $2.16 per share in May 2015 down to almost 30 cents. It lost $300 million during the first half of the past 10 years — and the grocery business was hardly getting easier in the last five years.

I was, of course, sorry to see Fairway go, but then I began to think of just how it would impact my food shopping.

Let me start by telling you about my supermarket choices -- and then, a story of how one of them let me down.

I live in New York, so my food shopping picture is probably not reflective of what it’s like to shop in a small town, but here are my options.

For local food, the best and freshest fruits and vegetables, I got to Broadway Farm. For deli, cheese, and prepared foods I go to Zabar’s. For regular supermarket shopping, we often order from Fresh Direct -- but at other times we shop at Gristedes, Whole Foods and Citarella (for its roasted chicken). And, for things that are unique, there’s Trader Joe’s.

So while Fairway going out of business is bad, we’re hardly living in a food desert.

Last week we were having people over to the house for a book party, and I wanted to order some food: 30 people, few hundred bucks.  My first stop was Zabar’s, thinking it would have a bunch of deli plates with meats and cheeses and crudités. It did, and everything looked delicious -- but they wanted the order in advance, and it was pretty pricey. Then I considered a supermarket option, but that seemed a bit pedestrian.

I settled on Fresh Direct, which had a bunch of nice-looking, reasonably priced options, all online.  I ordered a few trays and some beverages, set to be delivered between 10  a.m. and 1 p.m. on Monday.  The party was Monday evening.

At 5:30 a.m., Fresh Direct emailed this message: Of the 5 trays I’d ordered, three were unavailable and had been removed from the order.

WHAT?  The deli tray, the cheese tray, the fruit tray? Come on -- that’s standard stuff. I called in, and they said they didn’t have them, but they did have OTHER trays, would I like them instead? Some hummus, a different veggie tray. Sure.

Then the customer support guy put me on hold, and came back to say sheepishly, “Bad news. In order to get the replacement platters, you should have ordered them at 11 p.m. last night.” OK, now that’s nuts, since I wouldn’t have ordered them BEFORE I knew the food I’d ordered was unavailable. I pointed this out.

He went off the phone, and then came back, saying they could “make an exception" and take the order, but the soonest they could deliver it was between 4 p.m.  to 6 p.m. So, problem solved.

And, of course, the order came at 1 p.m, and the original platters were delivered.

So Fresh Direct -- which in the past had been a well-oiled grocery machine -- now seems to be getting caught up in its own delivery and fulfillment infrastructure.

Which brings us back to Fairway.

The New York Post reports that the chain is done, noting “Fairway will close all 14 of its stores, including its flagship store at Broadway and West 74th Street … The liquidation could be announced as soon as Wednesday, sources said.”

But not so fast. Fairway is owned by a private equity outfit and is $267 million in debt. Instead, it appears there’s a sale in the offing. Fairway has also agreed to sell five of its 14 locations to Village Super Market for about $70 million. Presumably, the current owners will write off almost $200 million in debt.

This is the grocer's second Chapter 11 filing. Ouch. It declared bankruptcy in 2016 after a roller-coaster three-year run on the Nasdaq. Fairway is now believed to be owned by Goldman Sachs and Brigade Capital Management.

So the cycle continues. Big money from investors comes into a space with tight margins -- like grocery -- and provides nifty innovation at a loss as it replaces old models with new rolled-up ones. Then, after domination, prices rise dramatically and service plummets.

Fresh Direct takes a big chunk of the grocery budget, but now you can feel the pressure mounting for it to get profitable. Consumers and competitors suffer.

And this trend will only accelerate in other areas like shared office space and car services, as more and venture funds start to ask their funded enterprises to get to profitability.

Definitely a trend worth being concerned about.