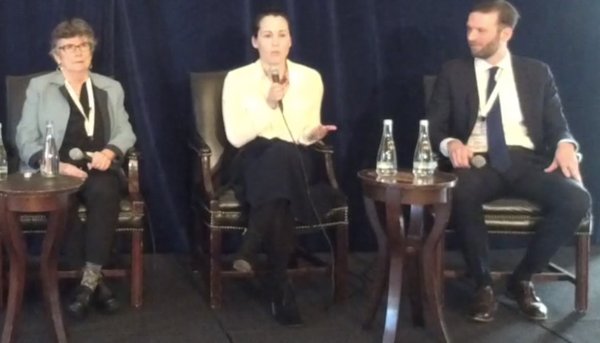 Wednesday's MediaPost Forecast 2020 took a look at those lengthy, dense privacy policies, what they meant, how they work, and pretty much agreed with Alison Pepper, SVP, Government Relations at the 4As (center), who said, "Short of writing a policy in haiku, who's gonna read it?"

Cathy Dwyer, Professor of Information Technology at Pace University (left), noted that there is academic research on how many person hours it would take to read every privacy policy on every site. "Policies can only being asked to carry out too many roles. They have to define areas of risk for the company itself. But can they also serve as a data flow transparency mechanism? I don't think so."

Android user Elliott Siebers, an Associate with Frankfurt Kurnit Klein & Selz PC (right), said the apps on his phone offer selections for geo-targeting that let the consumer choose "all the time, only when I'm using the app or deny it altogether." He finds such choice at those moments more valuable than a "lengthy, legally dense document."

Pepper averred that she is not anti-privacy policy. "But are we barking up wrong tree? I talk to Hill staffers, state staffers, consumer advocates. This idea that policy will be panacea of all ills ... Transparency is important. Policies are written by lawyers for lawyers. It's not a winner-takes-all approach."