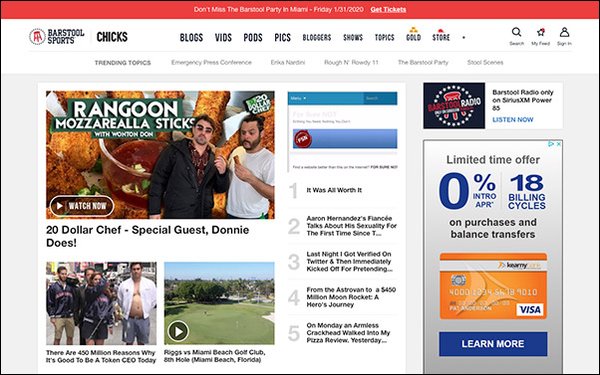 After three years, Penn National will increase its ownership to about 50%, investing an additional $62 million.

The deal values Barstool Sports at $450 million, according to The Wall Street Journal.

The sports blog was founded in Boston in 2003 by Dave Portnoy. It is known for its assertive tone and was embroiled in controversy around its portrayal of women and its response to employees looking to unionize.

Portnoy will stay with the company, as will CEO Erika Nardini.

“The chance to combine our content and fans with Penn National's massive footprint and to develop a unique and compelling omni-channel approach together, was for us a no-brainer," stated Nardini.

Penn National will be Barstool Sports’ exclusive gaming partner for as long as 40 years, giving it the rights to use the Barstool brand for its sports-betting products.

Hollywood executive-investor Peter Chernin acquired a majority stake in the Barstool Sports business in 2016. His Chernin Group will own 36% of Barstool after the deal. The remaining 28% will be held by the company's employees.

Penn National sees an opportunity to target Barstool Sports' audience of about 66 million monthly unique visitors with its casinos and an online sports-betting app.

Barstool Sports "will enable us to attract a new, younger demographic, which will nicely complement our existing customer database," stated Jay Snowden, president-CEO of Penn National.

The blog's reach will "lead to meaningful reductions in customer acquisition and promotional costs for our sports betting and online products, significantly enhancing profitability and driving value for our shareholders," he added.

Penn National operates 41 casinos in 19 states, including the Tropicana in Las Vegas.

Sports betting was legalized in the U.S. in 2018; individual states have the power to approve of the activity. It is now available in 14 states.