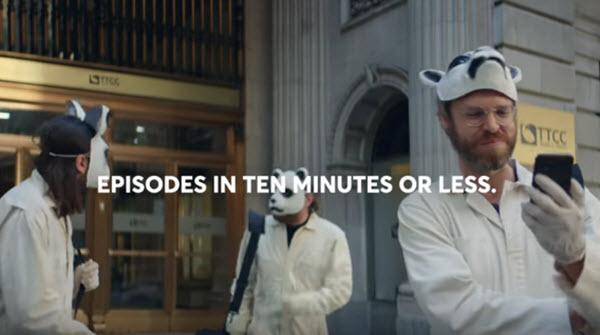 Yet-to-launch mobile-only short-form video streamer Quibi invested millions to explain its concept to the massive Super Bowl audience. But it appears that many viewers either didn’t get it, didn’t care or simply didn’t like the ad’s creative execution.

The big-game ads for Disney+ and Hulu performed considerably better, however, according to USA Today’s Ad Meter, which lets the public rank Super Bowl ads online, using a scale of 1 to 10.

The meter’s results, released this morning, show Quibi’s “Bank Heist” being the fourth-worst-rated out of the game’s total 62 ads, with a rating of 4.4.

Still, Quibi beat Donald Trump’s “Criminal Justice Reform” campaign ad – the worst-rated of all of the game’s ads, at 3.33.

Set to launch April 6, Quibi is the brainchild of Dreamworks co-founder Jeffrey Katzenberg and former eBay CEO Meg Whitman. The service will charge users $4.99 per month for content with advertising, and $7.99 without advertising.

As of last summer, it has attracted more than $1 billion in funding from players including Viacom and Disney, and had pulled in more than $100 million in advertising commitments, according to the company.

A surprise 30-second ad for Disney+ — the spot’s purchase was not publicly announced in advance — which touts “The Mandalorian” and the full array of original Marvel Studios content available on the streamer, came in at about the middle, ranking 29th (5.3 score).

The distinctive black-and-white ad has veteran New England Patriots quarterback Tom Brady faking out viewers by proclaiming that “all good things must end,” only to follow by saying “it’s time to say goodbye to TV as we know it... But me? I’m not going anywhere.”

30-second Super Bowl ads went for between $5.2 million and $5.6 million this year, according to various reports.