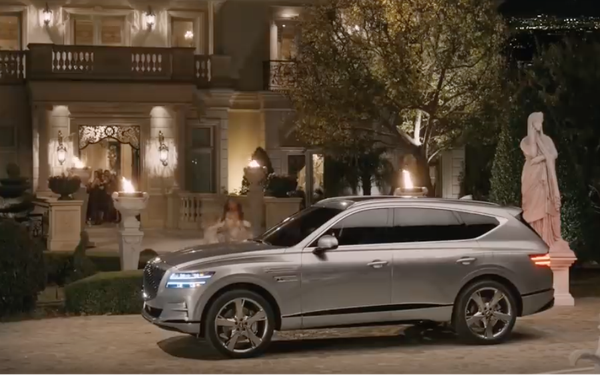 The automotive category took four of the top 10 spots for most engaging 2020 Super Bowl ads, according to EDO, a TV measurement and analytics company.

Genesis scored big with its first-ever spot for the new GV80 SUV featuring Chrissy Teigen and John Legend, driving over 25 times the search engagement of the average Super Bowl LIV spot. I actually liked the finished spot way better than the teasers, in part because it includes a cameo by a Sphynx cat.

The Jeep spot already has over 25 million views on YouTube. I’m one of the few people in the world who hasn't seen the original "Groundhog Day" movie, but the spot was still fun, particularly if you like cute animals and iconic comedians.

Shopping site Cars.com analyzed site traffic to advertised car model pages during a 16-minute window for each televised ad, eight minutes before each spot aired and again eight minutes after.

The results indicate an average 1646% lift to pages of the specific car makes and models, as well as an average 554% lift in automakers’ pages on the digital marketplace. Audi, GMC, Hyundai, Kia, Toyota and Porsche all aired spots during the football championship game.

“Watching the game isn’t a static experience as millions of viewers now use multiple screens to experience the spectacle, which makes it possible for them to react to a marketing message immediately,” said Brooke Skinner Ricketts, chief experience officer for Cars.com.

GMC teased the much-anticipated new Hummer EV, which is not yet available for purchase. The spot generated interest in previously released Hummer models.  Cars.com saw a lift of 479% to used Hummer pages, and a 26% lift to new GMC pages on Cars.com, in the eight minutes after the Hummer EV commercial aired.

Additionally, a surge in the presence of autos during this year’s big game was evident. This year there were eight automotive advertisers, the highest number since 2017. Across all advertisers, Kelley Blue Book traffic gains for the advertised models were at least more than four times then the average traffic levels of the comparison period.

“Automakers still see television, the NFL and the Super Bowl audience as important given the cost of producing these ads as the cost to place them," said Brian Moody, executive editor for Autotrader. "The Jeep, Hyundai and Audi ads may indicate that the focal point is shifting to Gen Xers given the presence of a 'Game of Thrones' actor, an actor for 'The Office' and a beloved '80s movie. Based on this, there still seems to be plenty of lift in selling actual cars, television as a viable mass communication outlet and the growing depth of Gen X’s pockets."

Kia’s “Tough Never Quits” ad promoting the Seltos proved to be the most successful ad of the night, driving traffic up by 147,969%  to its pages on Edmunds during the game.

Porsche’s “The Chase” promoting the Taycan drove traffic up by 40,830% during the game, and traffic to the Audi Etron page was up by 24,122% thanks to the automaker’s “Let it Go” advertisement.

“Ads featuring new, attractive vehicles or lesser-known brands generally tend to pique the most curiosity from car shoppers during the big game, and this year is no different,” said Jessica Caldwell, executive director of insights at Edmunds. “It’s encouraging to see more automaker commercials during the big game this year than we have in years past: the fact that there are so many exciting and innovative new products hitting the market is a great sign of what’s to come for the industry in 2020 and beyond.”