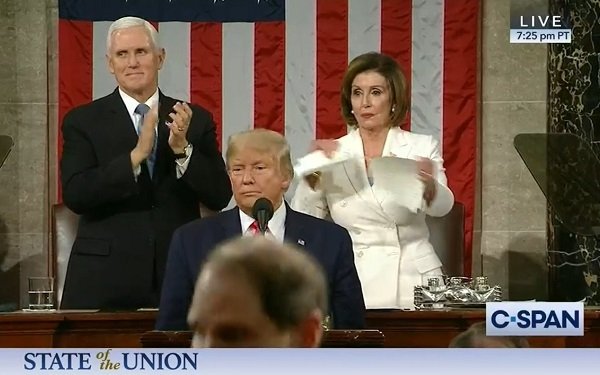 The value of the gift Nancy Pelosi gave to Republican candidates at all levels in this hotly contested election year is incalculable.

You do not have to be an expert or insider, such as a political consultant or marketer, to understand the importance of the image the leader of the Democratic Party handed the GOP Tuesday night when she tore up President Trump's State of the Union speech on national television.

After they were done rubbing their eyes in disbelief at what they had just seen, advertising planners and managers across the nation with Republican clients must have popped champagne corks long into the wee hours of the morning.

For here was a piece of video landing right in their laps that is pregnant with symbolism tailor-made for political commercials attacking the opposition. And they are free to use and reuse it in any way they see fit from now until November.

Moreover, and perhaps most importantly, this brief piece of video is simplicity itself. Its imagery is so easy to “read” -- especially when applied in the context of political messages -- that anyone over the age of 4 will understand the meaning that the ads will be trying to convey.

In the hands of the GOP, Speaker Pelosi's act of tearing the speech papers in half (and not just any speech either, but the one that purports annually to assess the state of our country in glowing, optimistic terms) will come to symbolize the following:

That the goal of the Democrats, led by Speaker Pelosi, is to divide the country -- to literally tear it asunder.

That Democrats as a group, led by Speaker Pelosi, behave in the manner of petulant children when they do not get what they want. Or to put it another way, Speaker Pelosi just gave Republicans the perfect piece of video to persuade Americans that Democrats, as embodied by their tantrum-throwing national leader, are less mature than Donald Trump.

That Democrats as a party, with the Speaker of the U.S. House of Representatives as their leader and standard-bearer, are lined up in opposition to the rosy picture of America that the speech represented, and they are wantonly disrespectful of the various “heroes” and other ordinary Americans of achievement who were recognized by the President in the speech (and are traditionally recognized by every President in these State of the Union speeches).

This last aspect of Speaker Pelosi's speech-tearing tantrum has already been the subject of countless commentaries and social-media posts.

This line of thinking has the Speaker -- and by extension, all Democrats -- coming out against such people as Charles McGee, 100, one of the last surviving Tuskegee Airmen, who was recognized during the speech.

Pelosi could not have handed the GOP a better gift if she had been caught on videotape drowning puppies.

What continues to vex and amaze in the wake of this sudden (or possibly premeditated) outburst on national television is the fact that she did it at all, followed by the question: Why did she do it?

This on-camera demonstration of childish pique might be one of those things some of us do in life that we regret afterward -- such as shouting at some poor soul on the other end of the line in a frustrating customer-service situation, or losing one's temper in some ultimately trivial encounter with someone else at a retail store, on in a subway train or at the gym.

These things happen to many of us in life. And later, we wish we had not acted the way we did. Publicly, Speaker Pelosi is not owning up to making a mistake. But privately, it would not be too surprising to learn that she realizes now that she let her emotions (in this case, months of anger at Donald Trump) get the better of her and as a result, made a spectacle of herself.

And more than that, she handed the opposing party a precious resource and rare commodity that is highly sought after in an election year -- a piece of priceless video that can be used in myriad effective ways against the very party she represents.