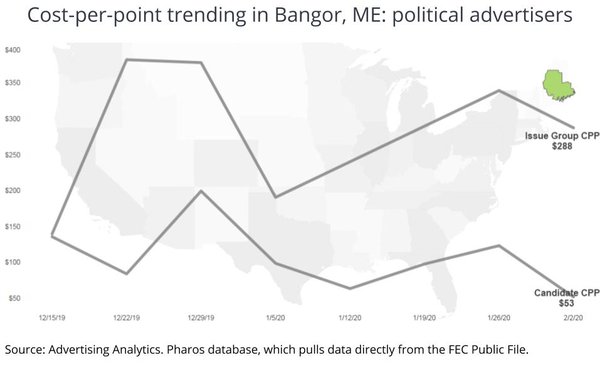 After dipping early in the new year, local TV advertising costs are trending upward in one of Maine's cities as the Presidential primary season heats up.

Rates in Bangor, ME, have risen to $288 per rating point for issue group advertisers, while dipping to just $53 per point for qualified candidates, which qualify for the lowest unit rates.

While Bangor is the 159th ranked Nielsen TV market, it's adjacent to New Hampshire and likely being used to reach voters in the primary market, but it also has its own local races.

"There were 10 political advertisers active in Bangor, ME this week, accounting for $305,000," Advertising Analytics notes in this week's report, adding, "The average prime-time cost-per-point for 35+ (viewers) ranged from $53 for candidates to $288 for issue advertisers."