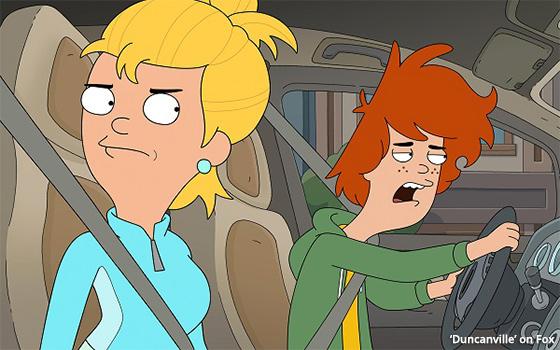 Successfully creating a TV series that aims to portray, in cartoon form, the way millions of us live now represents a kind of genius to which very few of us have access.

The creators of “The Simpsons” pioneered this 30 years ago. But in that show's hallowed footsteps have come a small number of other shows that have mined the social zeitgeist in much the same way.

The newest of these is the one called “Duncanville,” premiering Sunday night on Fox.

It is no coincidence that Fox is the place where “The Simpsons” was nurtured for three decades, and also subsequently the home of “Family Guy,” “King of the Hill” (one of the finest TV shows ever made, period) and others.

The title of “Duncanville” does not refer to a particular place (although there is a real Duncanville in Texas). Instead, it is the space inside the head of a teenage boy named Duncan (pictured above, with mom Annie).

Both Duncan and his mother are voiced by Amy Poehler, who is also credited as one of the show's co-creators and executive producers, along with Mike Scully, one of the long-time executive producers of “The Simpsons.” He also has a credit as a consulting producer on Poehler’s old NBC series “Parks and Recreation.”

Sometimes it seems as if these animated series capture contemporary family life more accurately than so-called “live action” comedies on TV. One exception would be “Modern Family,” now in its final season on ABC.

That show intersects with “Duncanville” in the person of Ty Burrell, better known as the earnest dad Phil Dunphy on “Modern Family.” On “Duncanville,” he lends his voice to cartoon dad Jack, father of Duncan.

Burrell's voice is so distinctive and recognizable that the two dads come out sounding more or less the same. This is a definite plus for “Duncanville,” not a minus.

Unfortunately, it is very easy for a long-time TV critic to instinctually react skeptically (if not cynically) to new TV shows that come along that purport to cover some of the same ground as various shows that have come before it.

But after watching two episodes of “Duncanville” (itself a rarity), my thumbs are pointing decidedly upward.

Like the best of these family-life animated sitcoms, the voices, art, animation, mannerisms, settings, situations, relationships and attitudes on display in “Duncanville” all come together in just the right way.

This might be due to the sunny way Amy Poehler seems to have with comedy. With all due respect to the many others who work on this show, I am guessing she is the one leading this choir and making it sing.

She and her colleagues have made a real-life sitcom out of animated characters -- a genius for creativity that I sometimes regard with a kind of awe. In this cartoon show, these characters are not even real people. And yet, they are us.