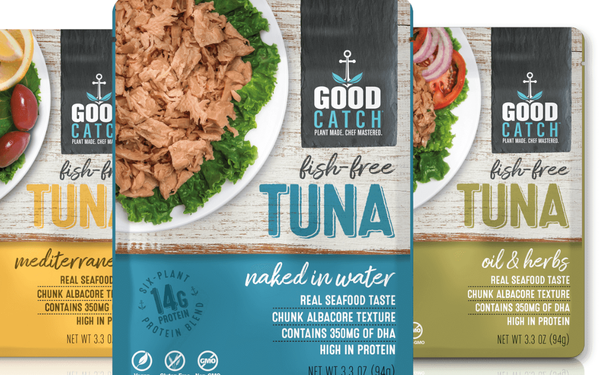 Plant- and cell-based seafood has a long way to go to catch up with meat substitutes, but private equity firms and grocery stalwarts like Conagra, General Mills and Tyson are hoping seafood substitutes are the next wave of consumer uptake.

There’s no shortage of similarities across the current offerings of meat and seafood alternatives made from plants or animal cells—including production, environmental and palate appeal and premium retail pricing. At the moment, though, seafood substitutes lag in public awareness.

Last month, General Mills’ venture unit, 301 Inc., participated in a funding round totaling $32 million for Gathered Foods, whose Good Catch plant-based tuna substitute launched a year ago this month in Whole Foods Market and Thrive Market. Distribution has since expanded to include Fairway, Luckys, Target and other retail outlets—more than 4,500 in total, according to Gathered Foods co-founder and CEO Chris Kerr.

“We have recently expanded our footprint to the U.K. with a launch with Tesco and are currently working on expanding our retail distribution to Asia as well,” Kerr tells Marketing Daily.

In this YouTube video, chef and Good Catch co-founder Chad Sarno notes that “Fish make up the vast majority of the animals slaughtered and consumed around the world.” He goes on to note that tuna and other species often contain heavy metals and micro-plastics.

“Seafood is the next wave in the plant-based revolution that’s been centered in the dairy and meat aisle,” says Kerr. “Consumers are demanding more meat alternatives, and we have experienced an incredible response to our fish-free tuna products.”

The General Mills investment, Kerr adds, “emphasizes the food industry’s recognition of our strategy, our reception by consumers and anticipation for more innovation to come.”

A variety of research has shown that two of the biggest hurdles to gaining consumer trial of plant-based meat substitutes has been their higher retail price and palate appeal (or lack thereof).

To lure taste buds, Good Catch combines seaweed and algae extracts with a blend of six legumes. The goal is to create “the ocean flavor without it smelling too fishy,” says Kerr. “We wanted freshness as the dominant smell and taste, so our focus with our fish-free tuna was to have a fresh, ocean flavor.”

As for pricing, Kerr says, “as a startup food company in a unique category, we had to invent proprietary equipment and source unique ingredients to make our product a reality. As our operations and sales scale up, we are confident that our retail price will level off to be similar to a high-quality packaged tuna.”