New 'War Of The Worlds' On Epix Is A Suspense Gem 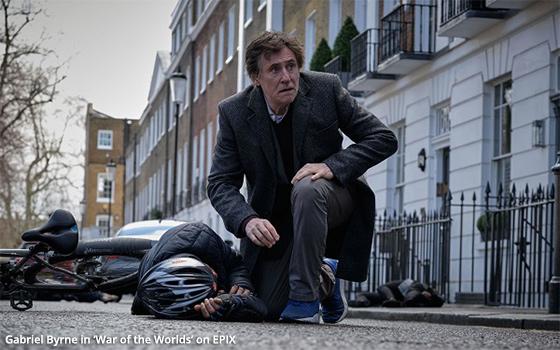 First published as a book in 1898, “The War of the Worlds” is a rare gift that keeps on giving.

H.G. Wells wrote it, and then, 40 years later in 1938, another Welles (Orson Welles, no relation, spelled differently) frightened radio listeners with his infamous version that fooled many people into believing the planet Earth was under attack by Martians.

Like a handful of other titles and fictional characters from the 19th century that morphed into movies and TV shows in the 20th -- most notably, “Frankenstein,” “Dracula” and Sherlock Holmes -- “The War of the Worlds” has spawned its own adaptations.

The best-known of them are the 1953 and 2005 films, but there was also a 1988 TV series and more recently, two miniseries from across the Atlantic -- one of which makes its U.S television debut Sunday night on Epix.

This one is called “War of the Worlds,” which was produced last year and was first seen on French television last October. The eight-episode series is in English and French (with subtitles in English).

The word “The” is missing from the title, perhaps because another adaptation appeared last year whose title was true to the original book, “The War of the Worlds.”

Produced in 2018 and 2019, this was a three-part BBC production set in Edwardian England (which places it more or less in the time frame of Wells’ novel). This one aired in the U.K. last November and December.

The version coming to Epix is decidedly modern, and no one will ever confuse it with the BBC’s Edwardian version.

Having never seen the BBC version, the TV Blog has no idea what it is like. But this new, contemporary take on the “War of the Worlds” story coming to Epix -- which the TV Blog previewed this week -- is a top-notch production that emerges as one of the best shows seen on American television so far this year.

This is suspenseful science fiction at its best. The situation establishes itself quickly in Episode One in scenes of widespread panic that are so effective, you feel as if they are happening to you.

The panic on display in the episode, and the panic a viewer can feel while watching this, is largely due to the fear of the unknown.

In a clever piece of made-for-TV filmmaking, the assault on Earth by an apparently huge armada of advanced space vessels is largely unseen. Instead, this Starfleet is seen only as a series of blips on radar and computer screens.

And suddenly, all life as we knew it has changed in the proverbial blink of an eye. In this “War of the Worlds,” the action moves back and forth between England and France. The series focuses on just a handful of characters who each survive the initial attack due to circumstances that are random and accidental.

These situations are very creatively produced and choreographed, and more importantly, wholly plausible -- even in the context of a fanciful invasion from space. Among the survivors are a science professor played by Gabriel Byrne (pictured, above) and his ex-wife played by Elizabeth McGovern (“Downton Abbey”).

This show was such a pleasure to watch that the completion of this TV Blog was delayed until later than normal because I could not resist watching at least part of Episode Two when I should have been writing.

Come to think of it, this is as good a place as any to end this review. Let's give this series four stars and call it a day.