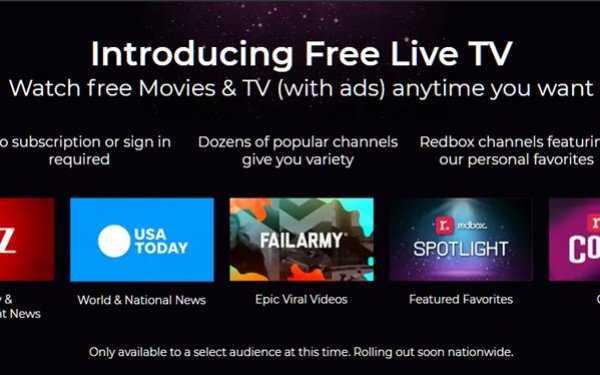 Just what the market ordered: another new streaming service.

This one is a free, ad-supported service from DVD rental kiosk company Redbox.

Called Redbox Free Live TV, the service is currently available only to a “select audience,” via the Redbox site and iOS and Android devices, but will “soon” roll out nationwide, according to the company.

At that point, it will also join Redbox on Demand on the Redbox app on Android TV, Apple TV, Chromecast, and Roku, on LG and Samsung smart TVs, and on Windows, Mac and Chromebook web browsers, according to Cord Cutters News, which first spotted the new service on Redbox’s site.

Redbox on Demand, launched in 2017, is the company’s online marketplace for buying or renting movies and TV content.

Free Live TV is Redbox’s second attempt at a streaming service. The first one, Redbox Instant by Verizon, launched in March 2013 and lasted just 19 months. The service, which offered a free one-month trial followed by unlimited streaming and four Redbox rentals per month for $8 per month, failed to attract sufficient numbers of subscribers.

The company’s new streaming service is offering “dozens” of popular channels, including TMZ, USA Today and FailArmy and favorites from Redbox channels. A guide lists content by categories including celebrity and entertainment news, comedy, featured favorites and “epic viral videos.”

Redbox “believes that the future of entertainment is dynamic and consists of the right mix of live and video content, and that’s why we’re building this new ecosystem of free content,” the company said in a statement released after the news of the service’s launch leaked out. “The offering complements our new-release kiosk and On-Demand offering with ad-supported catalog content, driving new entertainment occasions, while also providing new ways for Redbox to promote the brand outside of our network.”

But trying to transition physical renter customers to digital rentals and ad-supported streaming could be a challenge, as The Verge points out.

Redbox won’t have the built-in advantages of, for instance, Roku (now at more than 56 million users), which owns the platform on which the Roku Channel resides, and so can promote the content in its search feature, navigational menus and elsewhere.