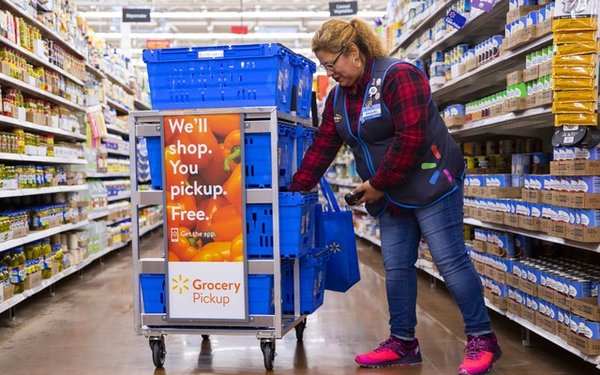 Walmart is the latest company to announce holiday disappointments, in results that have observers further questioning America’s puzzling relationship with retailers.

Overall revenues for the fourth quarter rose 2.1% to $141.7 billion, while operating income dropped 12.3% to $5.3 billion. Same-store sales in the U.S. rose 1.9%, below the 2.4% Wall Street expected, while ecommerce sales gained 35%. And the retailer's sales forecast for the year ahead came in lower than expected, writes Oppenheimer in its note about the new results.

The grocery business, which represents about 55% of Wamart’s U.S. sales, according to Oppenheimer, was strong. And with its extensive investments in delivery and pickup, its competitive position continues to improve.

But the Bentonville, Arkansas-based company says it was wounded by weak U.S. store sales in toys, apparel, and media and gaming. “We believe the compressed holiday season, softer toy industry sales, a lack of newness in gaming, and some assortment challenges in apparel contributed to the decline,” Walmart says in its announcement.

And Macy’s, which reported declining holiday sales, found itself back in the bad-news arena when S&P Global Ratings cut it to a “BB+” status, crossing from investment grade to junk.

S&P is basing the downgrade on Macy’s new Polaris strategic plan, the recently unveiled three-year effort to get the department store back on a growth track. It includes plenty of cost-cutting, significant store closings and a great emphasis on private-label. As a result, S&P expects Macy’s performance to get worse -- not better -- over the next several quarters.

“Macy's faces unique challenges among the large national department stores,” S&P says in the announcement. “A long history of acquisitions and expansion has saddled it with excess stores as shoppers' shifting preferences move away from mall-based locations and toward more value-oriented offerings.

"While we believe management's strategic plan is a necessary step toward rightsizing the enterprise, it demonstrates to us that the company's competitive advantage has diminished more than we expected.”