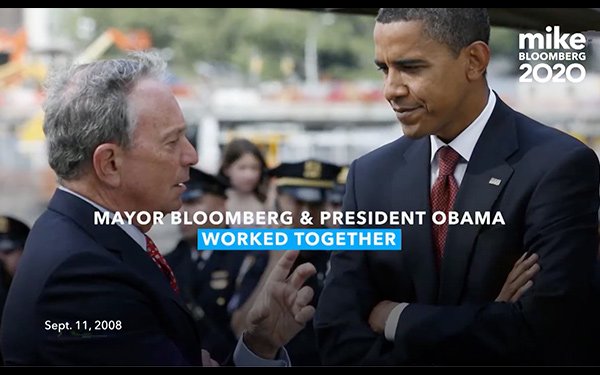 And it’s only February.

But perhaps more than his overall theme — “Mike Will Get It Done” — is the content of his TV ads, which tout Bloomberg’s current association with former President Barack Obama.

In many of the spots, Obama is found praising Bloomberg. One commercial places Bloomberg on equal ground with the former leader of the free world, praising Obama as “a great president” and in the next breath, saying Bloomberg was an “effective mayor” of New York.

A recent TV commercial talks up the efforts of both men to combat gun violence and improve young children’s education.

Has TV been effective for Bloomberg? Just a month or so ago, Bloomberg has been at 5% -- in terms of a recent PBS Newshour/Marist Poll poll as the choice to be the Democratic candidate. Now he is at 19%.

Perhaps in Bloomberg’s favor, according to some research, is a growing number of potential voters who pulled levers for President Trump in 2016, but are now inclined to vote for Bloomberg. The reasoning: He is a more “moderate” Democratic candidate, with the additional legacy of being a Republican years ago. (Bloomberg ran on the Republican ticket for NYC mayor to distinguish the lifelong Democrat from the other four Democrats in the race.)

For the upcoming “Super Tuesday” primaries in 14 states in early March, where 1,357 Democratic delegates are up for grabs, Bloomberg has already spent more than $124 million. Additionally, looking at digital media, a report from The Washington Post says Google and Facebook have served up 2 billion Bloomberg ads to date.

Even if you worry that all his advertising money is just looking to buy a election, the overall promotional buzz is growing. Major TV news outlets are devoting a hefty amount of press coverage to Bloomberg -- including ruminations over many positive and controversial decisions he has made as a city official and business executive.

Right now, one image is clear.

Whether voters are fuzzy on where Democratic candidates stand on health care, domestic terrorism, the economy or other issues, a much clearer association for Bloomberg comes with putting his image right next to a highly popular President.