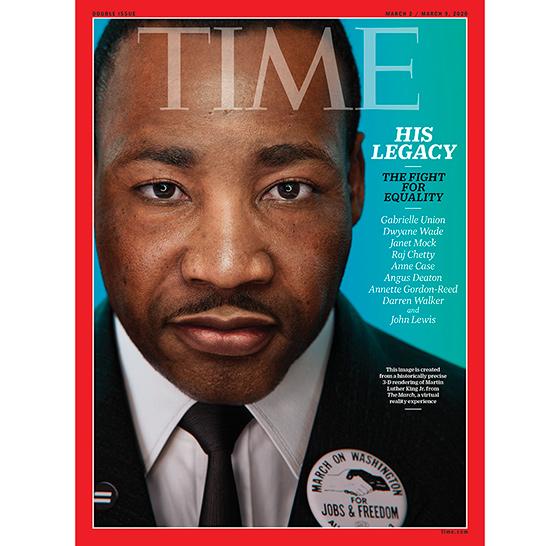 Timeis set to commemorate the 1963 March on Washington and Martin Luther King Jr.’s “I Have a Dream” speech through a high-tech immersive project and special issue.

Immersive project The March blends VR, AI, film-production processes and machine-learning techniques to bring King’s speech and the events in Washington to life. The project was co-created by Time’s Mia Tramz and immersive storyteller Alton Glass.

King’s likeness and the events of the march were created with support from Intellectual Properties Management, Inc., licensor of his estate, and Time’s journalism.

Work on The March began three years ago.

Time’s Patrick Lucas Austin wrote of The March: “When work on the project began…, a big question needed answering. Was the existing technology capable of accomplishing the project’s goals — not just creating a stunningly realistic digital human, but doing so in a way that met the standards demanded by the subject matter?... Digital life after death has raised ethical questions before, especially when figures have been used in ways that seemed out of keeping with their real inspirations.”

Austin added the timeline of the day was compressed for The March, but King’s gestures were based on research to be as true to life as possible.

Digitally restored audio, including the entirety of King’s 17-minute address, accompanies the project and will be re-released to audiences from Motown Records.

The March debuts at the DuSable Museum of African American History in Chicago on February 28.

Time’s special issue focuses on both the March on Washington and the state of equality in the U.S. today.

Time EIC and CEO Edward Falsenthal wrote of the issue, “Our hope is that it will not only change the way we see history, but also help awaken in all of us an understanding of the power of our own voice to have a positive impact on the world.”