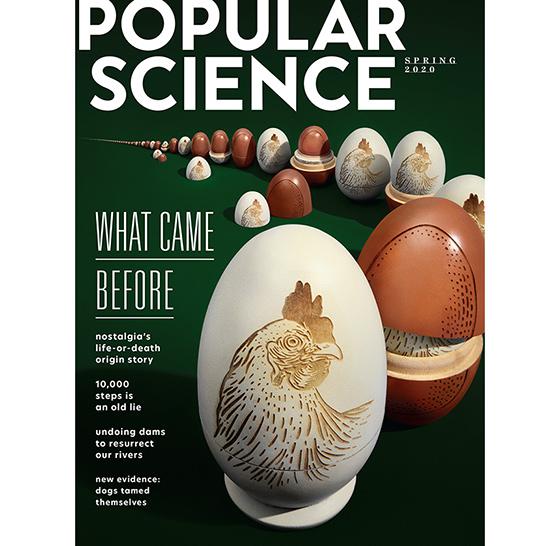 Popular Science has a new design, with a repositioning of the logo, a revamped layout and new fonts, to insert a younger and edgier feel that gives readers an experience distinct to the print product. The spring 2020 issue is on newsstands today.

Popular Science’s last redesign was in 2017. It has since been nominated for four ASME awards. The team felt the publication was ready for a refresh.

“We felt it was time to evolve. Not to explode the whole thing and start from scratch, but to lean into the things we love,” PopSci's executive editor Corinne Iozzio told Publishers Daily.

The magazine features a new table of contents and front-of-book sections.

The table of contents was previously an infographic that changed with every issue, but the information sometimes would “get lost” in the image, art director Katie Belloff told Publishers Daily.

Belloff, who is in her mid-20s, said the redesign helps the magazine “feel younger and more approachable.”

“I wanted it to appeal to people who are in my age range, but also to avid readers of the magazine already, who are a little bit older,” she said.

The table of contents design is now in a format that is easy for readers to navigate, alongside the theme of each issue, Belloff explained.

Each quarterly issue of Popular Science focuses on a singular topic. The spring 2020 issue, for example, is “What Came Before,” and the table of contents is superimposed on an image of cave paintings.

In the future, the table of contents could be a chart, a cut out or something more interactive, Belloff said.

The "Charted" section features visualizations, charts and graphs, while the "Goods" sections focuses on gear.

The new Big Qs includes “simple, straight-forward explainers” on the magazine issue’s theme, according to Iozzio. It will spread across six pages. The spring 2020 Big Qs section examines “Why are we nostalgic?”

The section “keeps the playful feel in previous issues, but mixes it up a little bit and make it feel fresh,” Belloff said.

A new back page reveals the conceptual art for Popular Science covers, with a photo-realistic concept, Iozzio said. Many think the magazine's covers are rendered with photo-editing software; they are created by the photography duo known as The Voorhes.

“We thought it would be great to incorporate that in a behind-the-scenes of how the cover gets made. It’s a real photo, not a rendering,” Belloff noted.