Dispatches From Philadelphia: AMC's 'Elsewhere' Is Another Winner 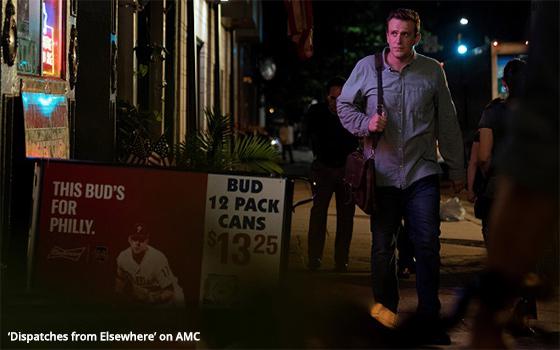 Those seeking to go elsewhere have a tantalizing new option this weekend.

It is “Dispatches From Elsewhere,” a new series premiering Sunday on AMC. Looking for a summary of what the show is about? Sorry, I cannot provide that because I do not know what it is about, even after watching the first episode and part of the second.

This show, a drama series that appears to have been written by its star, Jason Segel (who is also an executive producer), presents a challenge in the areas of description and categorization (although it is decidedly not a comedy).

However, these challenges present no obstacle to enjoyment. On the contrary, they enhance it. This show is not the same old thing, even if its theme of alienation and isolation is fairly common in TV shows and movies these days.

Leave it to AMC to nurture a show that delves into these oft-explored areas, but does it better than most. “Dispatches From Elsewhere” is a winner for AMC, and another feather in the cap for this cable channel that has put together a string of quality dramas over the past 10 years (or more) that are unequaled anywhere else on basic cable.

For the record, a partial list includes “Mad Men,” “Breaking Bad,” “The Walking Dead,” “Better Call Saul,” “The Killing,” “Preacher,” “The Terror,” “Lodge 49” and presumably others.

In “Dispatches From Elsewhere,” the depiction of contemporary life is so accurate that when the show’s main character, Peter (Segel), was receiving a mysterious call on his cell phone, my own cell phone rang with a robocall at the same moment.

Coincidence? Ordinarily, I would say yes. But in the world depicted in this show, the answer would be no.

Somehow, Peter and a small group of other characters are recruited into some sort of game or perhaps a scavenger hunt (this is not clear) by forces that contact them on their cell phones and then direct them to various parts of town (in this case, Philadelphia, where the show was filmed) where they meet up with others involved in the same mysterious game.

One reason for the show's effectiveness is the cast, starting with Segel (pictured above), who plays Peter with just the right amount of detached befuddlement.

Peter is what you might call a functioning loner. His inner life is empty -- devoid of friends and fun, among other things -- but he does manage to hold on to a job and an apartment. Eve Lindley plays another participant in the game, along with Andre Benjamin and Sally Field.

They are all great. And one reason that they are is that they have been given a great script to work with. “Dispatches From Elsewhere” is a highly literate show and a highly cinematic one as well.

There is even an animation sequence in Episode One that recalls the way Woody Allen suddenly resorted to animation in a scene in “Annie Hall” so many years ago.

Richard E. Grant plays the man who seems to be at the center of the mystery in “Dispatches From Elsewhere.” He is in charge of some sort of company called the Jejune Institute, which is not likely an institution of research or learning, but some sort of new-product marketer.

In fact, this whole mystery in which these characters find themselves just might be an elaborate viral-marketing ploy. Or it could be something else entirely.