From Oddsmakers To AI, The Democratic Race Is Still Anyone's Guess 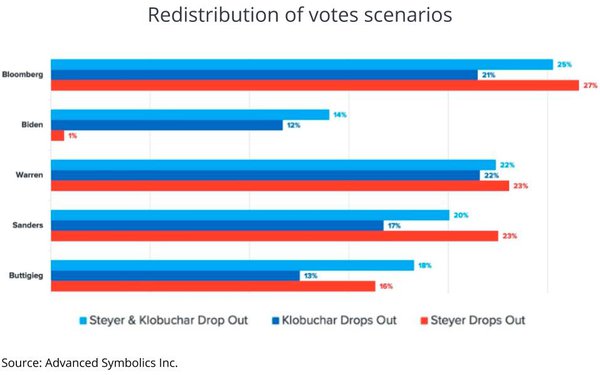 I’ve been covering political media and marketing -- of and on -- for about 40 years and there was a time when I considered myself relatively expert. Not anymore. The spin cycles have grown too compressed and the volatility of voter sentiment too erratic for me to even guess at the near- and long-term outcomes. Add data, technology and a variety of actors -- both transparent and not-so-transparent -- and I can honestly say the outcomes for 2020 are anyone’s guess.

In recent months, I’ve started receiving a variety of predictive analyses offering various handicaps -- everything from Las Vegas oddsmakers to AI technologists -- and I would say they’re interesting to follow, but, if you ask me, they’re no more reliable an indicator than the latest polls.

Here’s one I just received from an outfit called Advanced Symbolics Inc. predicting outcomes for the redistribution of Democratic votes for scenarios in which either/or both Amy Klobuchar and Tom Steyer drop out of the race.

I predict it’s wrong, and not just because the last AI-powered prediction I got from Advanced Symbolics on the eve of the Nevada Caucus predicted that, after Sanders, the ranking of the caucus would be (in this order) Buttigieg, Warren, Klobuchar, Biden and Steyer (see table at the bottom.

I predict it’s wrong, because we’re still too early in this process for any clear-cut patterns to emerge other than what the press and the pundits spin and what the pollsters track. As Iowa, New Hampshire and Nevada have proven so far, it’s still anyone’s race.

Meanwhile, if you're a betting man or woman, here are the odds for various presidential race scenarios, according to the head oddsmaker at Bovada.

Which Democratic Candidate For President Will Drop Out Next?

AI-Predicted Outcome Of The Nevada Caucus 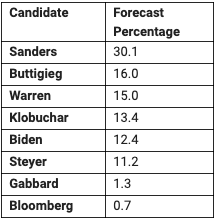