Tell A Vision: How The Candidates Looked In Tuesday's Debate 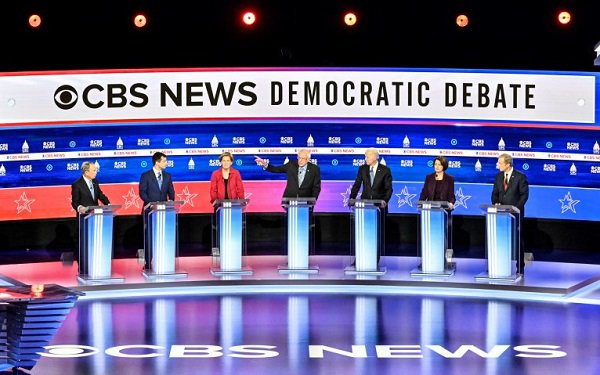 Bearing in mind that television is a visual medium, a TV columnist naturally will attempt to evaluate a political debate on its visual merits.

This is very difficult to do because the impressions the debaters make in these forums are so subjective. Judgements about how the individual participants looked and sounded on TV are literally “subject” to personal tastes and points of view, especially an observer's political viewpoints.

Thus, some conclusions, such as the manner in which a candidate pressed a point or expressed himself or herself in explaining an idea, are inevitably colored by a commentator’s own personal political leanings, if he or she has any.

Here is an example of that from Tuesday's prime-time Democratic Debate on CBS from Charleston, S.C., concerning Elizabeth Warren. In the words she said, the impression formed here was that her solution to every problem is to throw nine-figure dollar amounts at them.

She had a way of bandying about these amounts so casually that it left a viewer breathless. While watching her voice her plans to spend scads of other people's money I wondered whether anyone would later add up the amounts she cited.

During the debate, I remember thinking that with each of these spending declarations, Sen. Warren was damaging her prospects.

I had a passing thought that her campaign would be better served if she refrained from talking so much, if all she had to say was how much money she would urge the government to spend if she was President.

But that's the thing: Government programs with nine-figure budgets (or more) do not particularly resonate with me. But for all I know, the statements she made in the debate were widely applauded by others.

With all of this in mind, here come some judgements of how the six debate participants came across Tuesday night. I admit freely that these judgements are superficial, but TV is a superficial medium.

Not to pick on Sen. Warren, but since she has already been mentioned here, the overall impression she gave Tuesday night was that she seemed very cross and stern. As usual, she was articulate and well-spoken, however -- speaking in complete sentences (which cannot be said for all of the debaters).

So was Pete Buttigieg, who always speaks in sentences that feel well thought-out. He succeeded in giving an impression of unflappability. He even used the word “unflappable” to describe himself at one point.

Outlier Tom Steyer, who was not a participant in the last Democratic Debate earlier this month, delivered his answers and talking points with a constant, urgent nodding motion of his head.

Perhaps he was trying to communicate his passion and earnestness for what he was saying, but this characteristic simply made him seem eccentric and cheerless. He gave the impression of a man who has no chance of succeeding in this campaign.

Amy Klobuchar communicates so passionately that she seems sometimes to be on the verge of tears, which is not a plus. On the other hand, she looked and sounded well in this debate. At the same time, it remained impossible to imagine her eventually earning the party's nomination.

Mike Bloomberg once again had a terrible debate. He delivered many of his statements in a high-pitched whine. You had the impression that he was annoyed that these peons would dare to suggest that he is anything but the best man in the world to be President of the United States.

At one point, he tried and failed to effectively deliver a joke about the shellacking he took in the previous debate. This line was obviously preplanned, but it bombed. He also came a hair away at one point of blurting out that he had “bought” the United States Congress.

Bloomberg was a great mayor of New York City. But as a candidate on the debate stage Tuesday night, he looked more like the other outlying billionaire gadfly (Tom Steyer all the way at the other end of the stage) than a serious candidate for President.

Joe Biden's performance was otherworldly. His sentences (if that is what they were) made little sense. And he was peevish and testy throughout the evening about time constraints and over-runs that he apparently felt favored the other debaters.

Frontrunner Bernie Sanders was the same as he has been through all of the debates over at least the last two (or is it three?) election cycles. He was hunched over, and as usual, punctuated his remarks by jabbing the air with his forefinger.

By now, these are his trademarks. And if he was angered by the attacks made on him by the other debaters, now that he is the party's frontrunner, it didn't really show. Sanders always comes across as angry. Why should Tuesday's debate have been any different?