When Candidates Won't Shut Up, What's A Debate Moderator To Do? 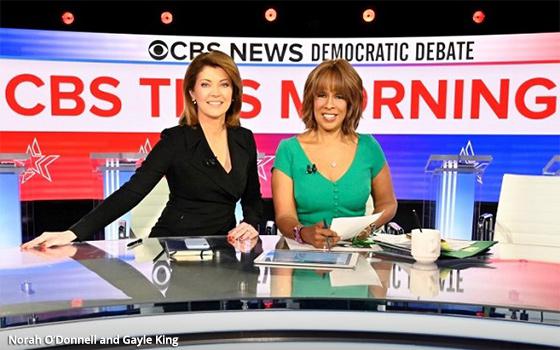 Sometimes it seems as if the job of debate moderator is right up there with hosting the Oscars -- they have both emerged as thankless jobs.

The Oscar job, in particular, has evolved from one of the best invitations a top entertainer could ever receive to one that nobody wants anymore because of the social media backlash that comes both before and after the job is done.

In the political debate arena, Norah O'Donnell (above left) and Gayle King (right) were lambasted by many on social media both during and after the Democratic Debate they co-moderated on CBS on Tuesday.

Detractors on Twitter and elsewhere blamed the two for the noisy, testy, out-of-control nature of the two-hour, prime-time debate. But what on Earth were they supposed to do?

The entire debate was characterized by a number of issues that gave an impression of overall chaos. At the center of the tumult was the tendency on the part of the six candidates to go over the time limits allotted for their answers, statements and rebuttals.

Adding to the chaos, and stemming from this rampant disregard for the debate's rules, various candidates would then either chime in to complain that others were going over the time limit in their answers, or to demand that they too be allowed to do the same thing.

In this area, Joe Biden was the primary culprit, but he was not the only one. In his complaining outbursts, Biden seemed to chastise the debate's moderators. This may have had an influence on the complaints that were then aired on social media about O'Donnell and King.

For portions of the debate, O'Donnell and King were seen unaccompanied by anyone else at the moderators' table. At other times, they were joined by fellow CBS newsers Bill Whitaker, Margaret Brennan and Major Garrett.

The complaining about time overages and the overages themselves, along with the combative nature of the debate generally, made the whole thing look like a free-for-all. But how much of that can one lay at the feet of the moderators?

The view from here is that the role the candidates played in the chaos was a lot more conspicuous than the moderators' lack of control over the candidates' behavior.

While watching this debate Tuesday night, I wondered: What are these moderators supposed to do to keep these candidates -- who, after all, are all adults -- within the debate rules?

As far as I know, there is no system in these debates for assessing penalties as in ice hockey, or awarding free throws as in basketball. It would be great if debate moderators could wield power like referees. But this is simply not the case.

One colleague suggested Thursday that if the moderators had made a stronger effort to rein in the debaters' behavior in the first minutes of the debate, then perhaps this might have helped set a tone in which everyone worked harder to adhere to the debate's time rules.

He is not wrong, of course. Perhaps the moderators should have asserted themselves in a much stronger way at the outset. Maybe it would have helped.

On the other hand, they were up against a group of people -- these six candidates -- who were at a crucial crossroads in this long campaign.

With the South Carolina primary on Saturday and next week's Super Tuesday primaries in 14 states on the horizon, the candidates likely felt that they needed to make strong impressions in this week's debate.

So they came on strong, went over time, and interrupted and insulted each other. It is hard to fathom how a couple of debate moderators were supposed to rein them in.

politics, television
2 comments about "When Candidates Won't Shut Up, What's A Debate Moderator To Do?".
Check to receive email when comments are posted.
Read more comments >
Next story loading