In New Tech Drama 'Devs,' The Devil Is In The Details 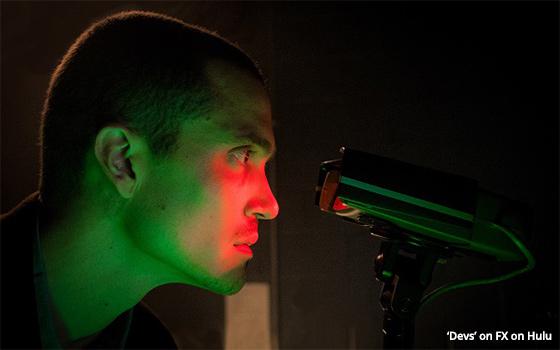 The new FX drama series “Devs” elevates the culture of a mysterious Silicon Valley tech company to the level of pagan religion and positions its enigmatic founder as prophet and deity.

This show is another entry in TV's expanding canon of series about the omnipotence of Big Tech. In this one, the company is involved in ultra-secret experimentation that seems to be aimed at preprogramming human DNA.

This is only hinted at in the premiere episode, and it will likely be revealed gradually and in greater detail as part of the show's central mystery: What happened to one of its young employees (pictured above)?

Want to watch “Devs”? Then you will have to find it on Hulu -- FX on Hulu, to be precise. This is the name of a new section on Hulu (a “dedicated content hub,” according to Hulu and FX) where more than 40 FX originals, both old and new, can be found as of this week.

FX on Hulu results from the fact that they are now both owned by Disney. The way it will work is this: Most new FX series will debut on FX's (or FXX's) linear TV schedule and then become available for streaming as soon as the following day on FX on Hulu.

“Devs,” however, is being promoted as exclusive to FX on Hulu, which means it will not be airing on FX. It is the first of a handful of planned limited series that will run exclusively on the Hulu FX content hub.

However you end up finding it, “Devs” is well worth the effort. The show seems to spring primarily from an English filmmaker and writer named Alex Garland who created the series, wrote it and directed it.

He and his team have made a TV show that represents a very high achievement in film craft. Last week, while watching and reviewing another new tech/alienation series -- “Dispatches from Elsewhere” which premiered last weekend on AMC -- I felt that the cinematic quality of that show was so conspicuous that I even thought up a term for this kind of television: Tele-cinema.

I did not use the term last week, but please allow me to apply it here. From the music to the architecture, “Devs” is a work of stellar tele-cinema. In “Devs,” it all comes together -- writing, staging, casting, cinematography, everything.

I would watch “Devs” for the architecture alone. Devs is the name given to the most secretive of the divisions of this corporation built in the woods of northern California. The Devs building is an architectural marvel that is literally vacuum sealed.

It is not clear in the premiere what Devs means, but the indications are it is a center for research and development. It might also be meant to suggest a Satanic purpose to this company (as in “Devils”) and its founder.

He is uncouth, unshaven, emotionless and sociopathic. His name is Forest, a name which invests the character with a sense of darkness and impenetrability, like a forest at night.

Nick Offerman plays the character just right -- by downplaying the menace he is evidently capable of, although you sense his omnipotence and the danger he represents from the very first moment you see him. Offerman receives great support from a cast that includes Allison Pill, Zach Grenier and Sonoya Mizuno.

TV shows such as “Devs” in which the quality of their production is on par with, or even surpasses, feature films are a big reason why the theatrical movie experience is on the wane and TV is the entertainment medium everybody is talking about.

“Devs” premieres on FX on Hulu on Thursday (March 5).