Bloomberg Drops Out After Spending Half A Billion On Presidential Race 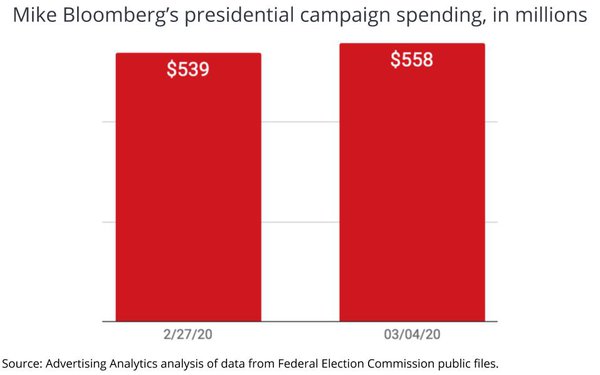 Democratic Presidential contender Michael Bloomberg is leaving the Presidential race after spending $558 million -- including nearly $200 million in advertising just on Super Tuesday primaries for 14 states -- with little to show for it.

Advertising Analytics says Bloomberg spent a massive $198.4 million on Super Tuesday -- versus Democratic candidate and former vice president Joe Biden’s $2.1 million in total, who was a big winner on the night.

Biden won nine states including a big delegate grab in Texas -- now amassing a leading 453 delegates. Sen. Bernie Sanders is next with 373 delegates. Bloomberg totaled 18 delegates, including an overall win for American Samoa, where he got 4 delegates.

Overall, Bloomberg is estimated to have spent nearly $600 million so far in all his political advertising over the last three-and-a-half months --  breaking many records for the most ever spent by a political candidate, all coming from his own money.

A statement from Bloomberg said that defeating President Trump is the most important goal. He will endorse Joe Biden for President.

advertising, politics, television
1 comment about "Bloomberg Drops Out After Spending Half A Billion On Presidential Race".
Check to receive email when comments are posted.
Next story loading