What A Week: Politics, Pandemic And Chris Matthews Too 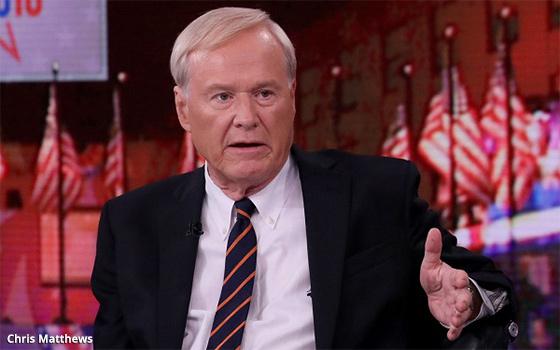 There was a subject in the news this week that I made every effort to avoid dealing with here: Chris Matthews’ abrupt resignation on Monday from MSNBC and the show he hosted for 22 years, “Hardball.”

Writing on this particular subject -- sexual harassment -- can give a columnist the sensation of walking into a minefield. It is a no-win subject to get into.

The subject has been prominent in the coverage of television and news media since at least 2016. It snared and derailed the careers of Harvey Weinstein, Roger Ailes, Bill O’Reilly, Charlie Rose, Matt Lauer, Billy Bush, Les Moonves and others.

Their misbehaviors were wide-ranging, and their various fates and fortunes varied too. No one has ever seriously questioned their guilt.

Chris Matthews’ offense seems to be that he had a serial habit of inappropriately commenting on women’s looks. In some cases, the remarks probably felt lecherous coming from this older man, who is now 74.

This seems to be the gist of the accusation leveled by a journalist, Laura Bassett, who said Matthews made remarks such as “Why haven't I fallen in love with you yet?” when he encountered Bassett one day in 2016 in a make-up chair backstage at MSNBC.

On the face of it, the remarks do not seem like they amount to much. And no one has accused Matthews of far worse sexual harassment behavior.

What the remarks might really reveal is that Matthews possesses an old-fashioned, wholly outmoded, increasingly unacceptable chauvinism that prevents him from regarding women with the respect they deserve.

Or more to the point, while a man might read those remarks in a news account and think his accuser is making a mountain out of a molehill, women see these stories and remember how they too have been harassed in this way for their entire adult lives and that it is now time for it to stop.

So why did Matthews resign? Probably because in the final analysis, he came to the realization based on this new dust-up that his day is done. The world in which he lived and worked has changed, and it is not his world anymore.

It is a realization he shares with many people of a certain age, particularly in the era we live in now, in which changes are happening so fast. And so, “Hardball with Chris Matthews” is no more. May Chris Matthews find serenity in retirement.

There was a certain irony in this long-time personality of political television calling it quits on the eve of the Super Tuesday primaries, as if he might have at least waited until Wednesday to resign after a last hurrah on Tuesday night.

The coverage of Super Tuesday on at least six English-speaking networks for the entirety of prime time and beyond was the big television event this week. It was great to see the TV news media all taking part, even if they were all basically covering the same thing.

This kind of simultaneous coverage of a major news event seems rarer and rarer these days, although the tradition appears to be holding on crucial election days.

As a result of all the coverage and commentary Tuesday night, the story was crystal clear: Joe Biden had made a comeback, Bernie Sanders was still very much in the game, and it was only a matter of time until the also-rans dropped out (which they did all week long).

The lesson seemed to be that when it comes to politics, TV news has it handled. After watching the coverage that evening, we all knew where things stood.

At the same time, a pandemic appeared to be accelerating, but TV news has yet to give the same attention to the spread of the Coronavirus that they give every night to politics.

The networks proved this week they can provide everything the rest of us need to fully understand the political situation. Perhaps they might consider taking the same approach to informing the public more fully about this disease, the way it is spreading, and what we can do about it.

news, television
1 comment about "What A Week: Politics, Pandemic And Chris Matthews Too".
Check to receive email when comments are posted.
Next story loading