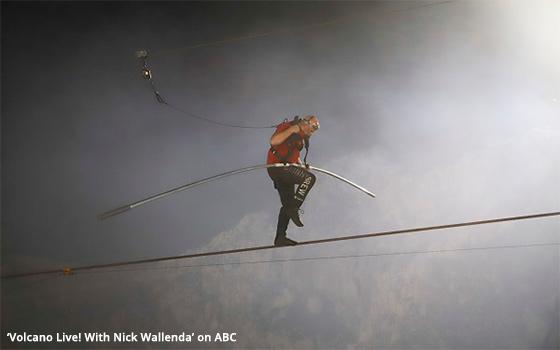 Couch potatoes were quick to criticize daredevil Nik Wallenda for having the gall to wear a safety harness as he crossed a live volcano on a tightrope last week on ABC.

From all of the complaining that erupted on social media during this live telecast last Wednesday night, you would have thought Wallenda had been caught cheating.

Instead, he very sensibly crossed this bubbling Nicaraguan volcano tethered to safety equipment that did not hinder nor help him do the actual walking.

Instead, it simply ensured that if he suddenly lost his footing, heaven forbid, he would not then plummet to his death in a bubbling, steaming cauldron of red-hot, molten lava.

This precaution made sense to me, but not to many others who voiced their disappointment on Twitter. “They might as well have done this in his backyard 10 feet up. With a harness on, who cares? Where exactly is the danger they hyped?” asked BobTheBadgerGuy (evidently a fan of the University of Wisconsin) using the hashtag #VolcanoLive.

It was an oft-repeated refrain during the telecast. “It’s not even impressive if he has a harness on what’s the point?” @swagtweetsyolo asked rhetorically.

“Am I missing something #VolcanoLive?” tweeted @FairwayNinja, who then addressed Wallenda directly. “They keep talking life and death and yet you have a safety line attached to you? I'm happy you do, but I'm confused. If you fall you'll likely 99% be ok.”

Could it be that viewers who tuned into this live, tightrope-walking stunt actually wanted to see Wallenda take a fatal plunge into that Nicaraguan lava pit? Possibly.

“I think this walk is really a test for how long America will watch something boring just in case someone gets hurt,” observed @alisa6148.

“Just to be clear, everyone hopes this guy falls into the volcano, right?” asked another tweeter (whose Twitter handle seemed vaguely obscene so it won’t be reproduced here).

To be fair, a number of Twitterers defended Wallenda and his safety harness. “I’m really enjoying everyone tweeting about how they could also walk for 31 minutes on a tightrope 1800 feet above an active volcano when they’ve probably never walked 31 consecutive minutes on the ground,” said one tweet.

“I don’t care if Nik Wallenda has a harness and a strap walking across one of the world’s most volatile volcanos, the wind and the toxic gasses are a huge problem! If it were easy and not unthinkably dangerous then everyone would do it!” exclaimed @PlayByPlayGuy1.

While the naysayers and their detractors were active on Twitter during this live event, viewership turned out to be the lowest for a Wallenda tightrope special -- 4.17 million viewers, according to trade press reports.

The highest-rated of these stunt shows seems to have been Wallenda's 2013 walk over a gorge that was part of the Grand Canyon. About 10.7 million tuned in for that special on Discovery Channel.
television
Next story loading