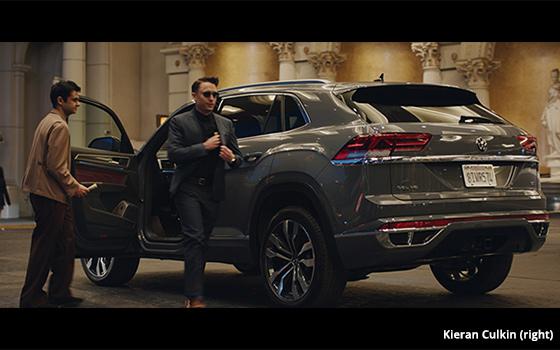 Volkswagen is releasing “The Accountant,” a new movie-like ad campaign starring actors Paul Giamatti and Kieran Culkin that will unfold over the course of the month to form a narrative storyline under the tagline “Excessive Where It Matters.”

The series, developed with agency Johannes Leonardo, first opens on Giamatti as a beleaguered celebrity accountant tasked with advising rich kid Culkin away from his lavish spending sprees. After hearing about Culkin’s attempt to purchase a plane, Giamatti is thrilled to hear Culkin’s latest purchase is actually VW’s new Atlas Cross Sport. The first spot ends with Giamatti discovering Culkin is now in Vegas at Caesar’s Palace.

Casting was key in having characters with the right tone for Volkswagen, explain Bryan Barnes and Allison Lackey, associate creative directors at Johannes Leonardo. “We’re not sure anyone would have played the role of a high-profile celebrity account better than Paul Giamatti. And Kieran, he’s an excellent actor. We are also huge fans of their work and wanted the casting choices to be as premium and unexpected as the car itself.”

Giamatti and Culkin have recently appeared in shows “Billions” and “Succession,” respectively, that spoof the insanely wealthy.

Barnes and Lackey say both the agency and VW didn't want the ad to be slapstick. “We knew we needed the perfect balance of drama and comedy within the campaign -- a full range of emotions so you can feel the accountant’s struggle and care for his overspending clients, while also giving viewers the subtle and smart humor that has always made Volkswagen great.”

The first spot in the series will kick off on Monday night during “The Bachelor” finale on ABC. There will be two more spots as part of the three-part series launching throughout the month during March Madness on broadcast, digital and social.

That campaign begins a year-long effort against materialistic culture as it relates to the “Drive Something Bigger Than Yourself” platform.

“There is a lot of excess in the way that cars are being engineered and manufactured today,” say Barnes and Lackey. “The Drive Bigger platform isn't about saying excess is a bad thing, it's about leaving unnecessary excess behind. Most people don't need an excessive amount of cup holders or an SUV that can tow a yacht.”

In the brand’s first full-scale marketing effort since its emission scandal, VW debuted a long-form film that opened on ten seconds of darkness and used news and radio recordings from the scandal to reconnect with the American public. Then, the agency launched an advertising campaign for the Volkswagen Beetle—a car not available for purchase anymore.