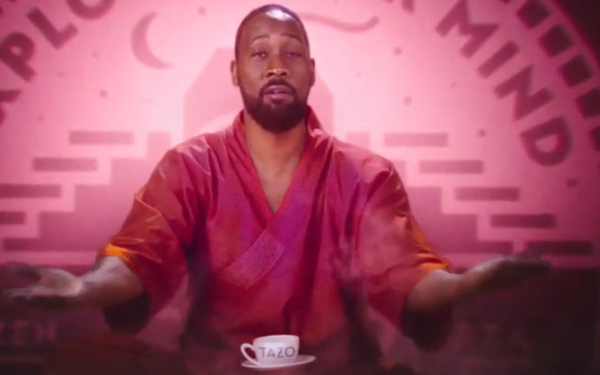 Unilever’s TAZO tea and hip-hop artist RZA from The Wu-Tang Clan are teaming up to help folks deal with burnout from today’s “hustle culture” by embracing meditation through a five-track audio experience.

According to Laraine Miller, senior director of U.S. tea at Unilever, today's hustle-driven culture “is a drain on creativity, and instead of pursuing the passions they truly care about, people feel confined by the pressures of their day-to-day routine.”

When Unilever planned the Staten Island event, “We knew there would be a limited number of attendees who could meet with RZA in person, so we wanted a way to bring this inspiring camp experience to the masses,” Miller tells Marketing Daily.

“Our proposal to RZA: distill your Zen teachings into an audio collection that anyone can use.”

The result is a five-part audio series available on Amazon Music, Apple Music and Spotify, plus the French streaming service Deezer.

The five tracks written and scored by RZA include such titles as “Kill the Noise”—which instructs listeners how to survive and thrive in the face of distraction—and “Bite or Stop Barking,” which offers ways to focus on a goal and follow through on it.

In this video, RZA offers to help people harness chaos, disarm doubt and forage for inspiration. “Join me for a series of guided explorations that will unlock the hidden powers that exist within you,” he says.

According to TAZO, meditation has become one of the fastest-growing health trends in America, its popularity having increased more than threefold over the past five years, per the U.S. Centers for Disease Control.

Unilever says that approximately four in five consumers drink tea, with millennials being the most likely to do so.

Amid a surge in ready-to-drink tea beverages, U.S. sales of packaged tea have been slightly under water or flat over the past few years, per Nielsen. In the 52 weeks ending Feb. 22, sales were down 1.5%.