Disruptive Social Networks Have Long Been With Us: Historian 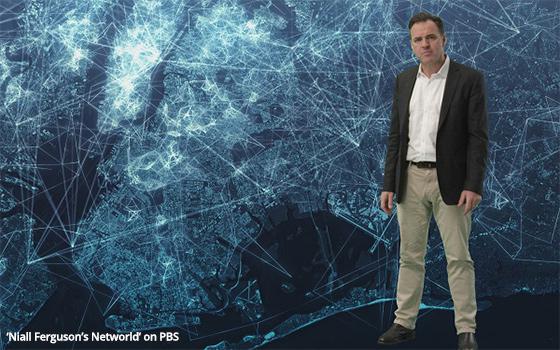 There is much to chew on and absorb in historian Niall Ferguson’s fascinating new documentary series for PBS.

And since most of us are more or less confined at home these days, spending three hours Tuesday evening with Ferguson as he explores the concept of networks and networking throughout history is as good a way as any to pass the time.

This documentary, titled “Niall Ferguson's Networld,” consists of three one-hour parts, but PBS has decided to air them all back-to-back in one evening starting at 8 p.m. Eastern.

The documentary is adapted from Ferguson’s 2019 bestseller called “The Square and the Tower: Networks and Power, from the Freemasons to Facebook.” What’s the show about? Ferguson, pictured above, sums it up at the start of the show:

“In this series, I am going to argue that you can't understand the vast disruptive power of modern networks without looking to the past because there is nothing new about social networks,” says Ferguson, offering the kind of sweeping generalization that often characterized his occasional PBS documentaries.

He then continues in the same vein. “When we understand these insights, suddenly the whole history of mankind looks different and we begin to understand that our present and future networld might not be the connected Utopia we were promised, but an increasingly polarized and unstable place where the truth itself is at a disadvantage.”

But Ferguson's hyperbolic tendencies do not create any obstacles to enjoying or otherwise benefiting from watching this TV show. On the contrary, his evident enthusiasm for his subject matter -- something he refers to repeatedly as “network science” -- helps make this three-hour journey worth the trip.

The three parts of “Networld” have three distinct titles -- “Disruption,” “Winner Takes All” and “Networld War.”

In each of them, Ferguson demonstrates how modern “network theory” can help explain or give new perspective to various historical events ranging from Martin Luther’s Protestant reformation of the 16th-century to Paul Revere's midnight ride in the 18th.

“Networks [such as the Freemasons, for example] play a pivotal role in history,” Ferguson says as he links these historical “networking” examples to our modern, networked world -- which is, after all, the whole point of this exercise.

For example, Ferguson posits that Johannes Gutenberg’s invention of the printing press in the 1440s was as disruptive an innovation in that time as the internet has been in ours.

To bolster his arguments, Ferguson assembles a small army of network theorists and scientists who spend their lives studying the way modern (and sometimes historical) networks work.

Some of the so-called “laws” of network science that he comes up with to help explain trends in modern social media might strike some as obvious or simplistic, such as: Birds of a feather flock together. (There is even a word for this phenomenon: homophily.)

With assistance from scientists who have actually proven this, Ferguson shows how very little cross-pollination takes place on social media between, say, liberals and conservatives on social media networks such as Twitter.

“It's as if social media, by increasing our tendency to flock together, reduces our ability to communicate and inflames our differences,” he says, once again linking our contemporary world with history.

“In short, modern social networks, enlarged and accelerated by the internet, have the capacity to exacerbate our natural divisions,” he says. “The fascinating thing is that a very similar process occurred when the printing press allowed a religious reformation to sweep Europe.”

Each of this show's three parts cover considerable ground -- from the rise of fake news (and its historical antecedents) to the rise of the internet as a hugely profitable enterprise based mainly on -- what else? -- advertising.

In the documentary's second hour, Martinez succinctly describes the automated system by which ads appear on web pages: It is “the open market in human attention that effectively pays for most of the internet.”