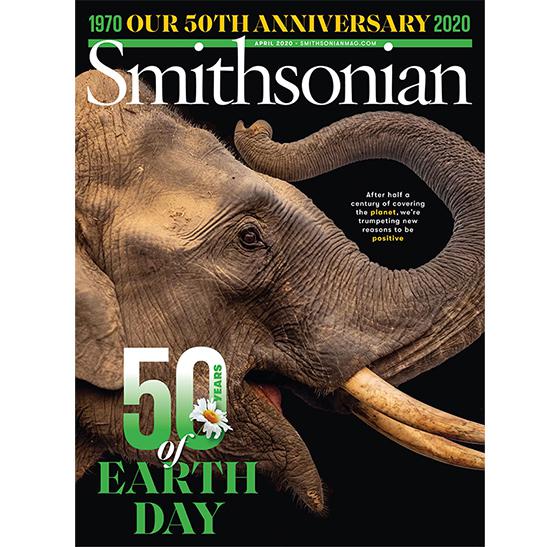 Smithsonian is celebrating its 50th anniversary next month with a dedicated print issue.

"In an ever-changing media landscape, Smithsonian magazine has remained a constant source of optimism and information about the world around us for half a century,” stated Amy Wilkins, Chief Revenue Officer at Smithsonian Media. "Our 50th anniversary issue celebrates where we have been, as a trusted publication and as a society, and looks ahead to the future of our planet."

Climate change coverage in recent years has carried a tone of “gloom and doom," and "people are getting worn out by reading that all the time,” Debra Rosenberg, executive editor at Smithsonian magazine, told Publishers Daily. “We wanted to find a way to cover these really important issues, but do it in a slightly different way. We took an upbeat approach.”

The issue includes “success stories,” in a way, noting the progress made over the years.

One story in the issue, for example, covers how three countries in Africa are working together to create a reserve for endangered mountain gorillas, working across borders to protect them. The population of the species is “rebounding,” Rosenberg said.

The issue also looks back at some of Smithsonian magazine’s most popular stories, photographs and cover subjects, including 16 U.S. presidents, four pandas and one anti-pollution blacksmith.

In its half-century history, Smithsonian magazine reporters have filed stories on the ground from over 145 countries.

Its rate base is 1.6 million this year, down from 1.7 million last year. Two-thirds of the magazine’s revenue comes from consumers.

“We are investing in new ways to attract members,” Wilkins said. “We have the largest membership” at the Smithsonian Institution, she noted.

“We are investing in digital — like a digital subscription, the way we use our email, how we might use social even further, what other member benefits would be meaningful to this audience," Wilkins said.

The team is also looking at upsell opportunities for its existing audience, while "creating a more engaging environment online to attract people to return.”

The magazine has generated millions of dollars of revenue for the Smithsonian Institution, which then funds initiatives and pays salaries, Wilkins said.

The latest issue provides an update on zoologist John F. Eisenberg’s original research, and why some experts today believe it is important to understand how Asian elephants think.

Some of the advertisers, in both print and digital in the 50th anniversary issue, include Costa Rica, for campaigns promoting sustainability, and Hyundai, promoting its hydrogen fuel cell, according to Wilkins.

The Paper and Packaging Board is running a custom unit in the April issue, touting that it is a natural renewable source, she added.

With the threat of COVID-19, the Smithsonian had to postpone Museum Day, when visitors get free access to participating museums across the country. The initiative launched 16 years ago, to celebrate the magazine’s 35th anniversary.

“When people can’t access the physical museum, [the magazine is] still the connection to the museum,” Rosenberg said.

This story has been updated to note the magazine is available online now and on newsstands March 24. It has generated millions in revenue for the Smithsonian Institution.