Let Us Pray: 'Sacred' PBS Doc Arrives Just When We Need It 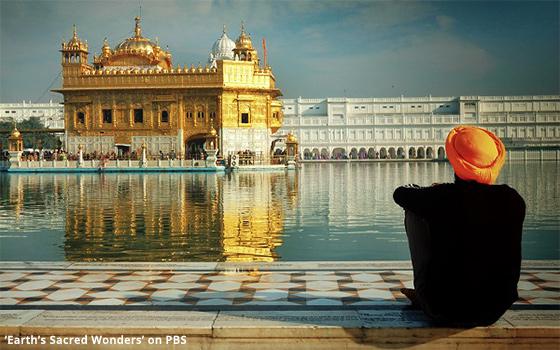 A new PBS documentary series on the lengths that human beings will go to practice their faiths comes along next week at a time when faith and hope would seem to be in short supply.

This three-parter, titled “Earth’s Sacred Wonders,” fulfills TV's fundamental mission, which gets reiterated from time to time here in this daily TV Blog: When you cannot go somewhere yourself, TV takes you there. Or at least it should.

In this show, TV takes you on a series of illuminating visits to some of the planet Earth's most incredible religious shrines, temples, and houses of worship.

The show is mesmerizing from the very first segment in the premiere episode (airing this coming Wednesday night). In this adventure, the documentary takes you on a tour of the temple complex in Cambodia known as Angkor -- the largest religious site on the planet, according to the show.

There, you will see the site's maintenance workers scale the highest tower in this complex of ancient buildings to uproot saplings that are growing between its stones and threatening its structural integrity.

You will watch them do this high up, in bare feet, without safety equipment, on the narrowest of ledges composed of stone that is hot from the midday tropical sun. Thus, this documentary is not only uplifting; it is also an edge-of-your-seat thrill ride.

From there, it is on to a Catholic Church in Malaga, Spain, that houses a statue of the Virgin Mary clad in gold that is paraded down the town's narrow streets once a year for six hours on the shoulders of more than 200 men.

After that, make a stop at China's Shaolin Temple to watch its famed kung-fu monks. A few minutes after that, you will be in northeast London, taking a tour of an opulent Hindu temple built just 25 years ago.

All of this will take place in just this show's first 35 minutes. After that, for well over three total hours, the show continues in this vein without let-up. And nor should it let up.

This is escapism that is worthy of the word -- a globe-trotting, documentary adventure like no other that has been seen on TV in recent memory.

The sights, sounds and spirituality of this documentary can serve as a reminder that there is much to celebrate on the planet Earth, and that many still keep faith even in the face of great adversity.