Home-Made TV Will Do For Now, But It Is Not 'Broadcast Quality' 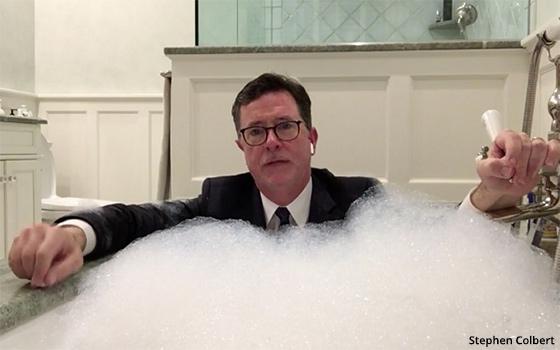 And now, he has appeared on CBS from his actual home -- from his bathtub, to be exact. The newly produced bit (pictured above) -- a bathtub monologue -- turned up last week tacked on to the beginning of a planned repeat episode.

More recently, other late-night shows have announced plans to produce shows under the restrictions posed by COVID-19 quarantines and isolation.

The most recent of these announcements arrived Monday from Comedy Central: Starting this week, Trevor Noah’s “Daily Show” will henceforth be temporarily titled “The Daily Social Distancing Show.”

Noah and his production staff will all be working from their respective homes, the press release said. And stitching together each night’s show in the same remote way.

The same goes for Conan O’Brien on TBS. “Beginning on Monday, March 30, ‘Conan’ will begin airing new episodes on TBS that will have been shot remotely on an iPhone, without an audience and with guest interviews being filmed via video chat,” said a press release from WarnerMedia. “O’Brien’s production staff will remain working from home,” the release said.

And then there was this canned quip from the longest-running late-night TV host currently on the air: “The quality of my work will not go down because technically that’s not possible!” O’Brien said.

Actually, it is possible. But more on that in a moment.

Some might recall that almost exactly a year ago -- in March 2019 -- “The Tonight Show Starring Jimmy Fallon” filmed an entire show on Samsung smartphones.

In part, it was an experiment to see just how a show such as “The Tonight Show” would look and feel if it was filmed entirely on such small handheld devices -- albeit devices that are very sophisticated and versatile.

The episode also represented a timely, program-length promotion for the new Samsung Galaxy S10+ smartphone, which was then getting introduced.

The Fallon people certainly could not have foreseen that their experiment in the uses of new technology for production purposes could come in handy a year later when the world is suddenly finding itself in a pandemic in which teamwork in the workplace can only be accomplished in isolation for the time being.

Today, all of the technology these TV shows need to shoot, record (as in audio) and post-produce is available for them to use in whatever locations they are in, as long as they possess the equipment, know how to use it, and it is properly installed and set up in their home workstations.

All communications that would normally take place are also possible today for those working remotely. Thus, it should be possible to cobble together the late-night shows, including the guest segments, although Fallon might now have to simply talk to his guests rather than play childish games with them.

The big caveat is this: When the shows return to normal operations after the pandemic wanes, it can be hoped that the high level of production that audiences have long been accustomed to will also return, along with the shows’ studios and live audiences.

To be specific, interviews conducted via Skype do not meet the standard of what was once known as broadcast quality. Under normal circumstances, no one would air them, right?

Wrong. Interviews via Skype or other webcam services have become de rigueur on TV news shows, long before the current crisis made them necessary.

You’ve seen these things: An interview subject is seen in his den, office or kitchen being interviewed by a news anchor or talk-show host in a TV studio. The interview subject side of these interviews is often characterized by a grainy, un-color-corrected picture and sound that is tinny, echo-y or both.

In the vast majority of these segments, the interview subjects are clueless about how to position their web cams. Thus, you’ll see these people’s faces seen toward the side of the screen, or near the bottom -- their chins barely making it into the shot.

Do you know what you see most often in these shots? Two things: (1) Often an environment that, to put it kindly, is eclectic -- meaning it is just a cluttered, unkempt mess, and (2) the interview subject’s nostrils, since so many of these people seem to position their web cams at low angles aiming upward.

This is all fine and good in the unique situation created by a pandemic and its restrictions -- the likes of which none of us have ever lived through before. But after this is over, a return to “broadcast quality” would give us all hope.

television
1 comment about "Home-Made TV Will Do For Now, But It Is Not 'Broadcast Quality'".
Check to receive email when comments are posted.
Next story loading