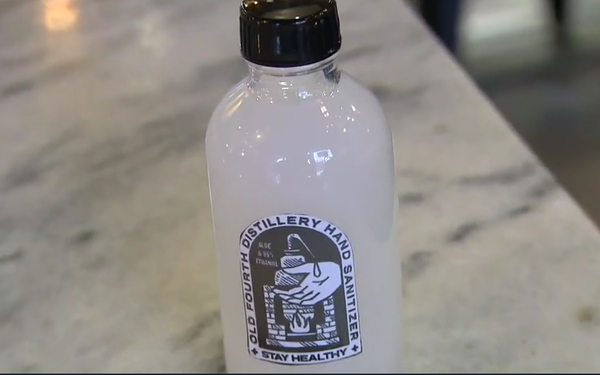 Above: Small Atlanta liquor distillery is giving away its homemade hand sanitizer.

As companies nationwide are being asked, or volunteering, to do their part to attack the COVID-19 crisis, unlikely help may be coming from the liquor industry.

The Distilled Spirits Council of the United States (DISCUS), is working with Congress and the White House to ease a rule that would make it possible for distillers to use the alcohol they have on hand to make booze, and instead use it to produce hand sanitizers -- but not pay the federal excise tax on using undenatured ethanol.

Using denatured ethanol has already been approved by the tax board, without a special permit, as long as distilleries follow the World Health Organization formula for hand sanitizer. That includes a mixture of  grain neutral spirits, glycerin and hydrogen peroxide.

Distilleries are asking Congress to amend pending emergency COVID-19 relief legislation so they can use the ethanol they have on hand -- either denatured or undenatured -- to make hand sanitizer. That will be quicker and less expensive.

Chris Swonger, the DISCUS chief executive, issued a statement thanking the tax board and Congress for “working with us to cut through the red tape so we can quickly help fill this need in our country,” and asked for that one last hurdle to be eased.

“The distilled spirits industry is already facing difficult times with tariffs and the shutdown of bars and restaurants,” Swonger said. “Distillers are members of the community and want to help, but forcing them to pay taxes on the hand sanitizer is just plain wrong.”

Liquor is one of the most heavily taxed products in the U.S., so it’s understandable that being required to pay a tax to make hand sanitizer might seem an unfair burden.

"CBS Evening News" reported on a small Atlanta distillery giving away homemade sanitizer. It does not fit World Health Organization requirements, since it's made up of just alcohol and aloe -- but those are the ingredients suggested around the web for folks making their own.

President Trump on Wednesday said he could use the Defense Production Act to force companies to make products needed in an emergency. Though that was thought to mean mostly the production of gear like masks, hand sanitizer is also needed, and DISCUS seems eager to provide it.

The United States government used distilleries in World War II to provide alcohol needed to make ammunition and synthetic rubber, and anti-freeze, antiseptic products, too. Distilleries  weren’t allowed to use their plants to produce alcohol for beverages, according to a liquor industry history website, Bourbonveach.com.