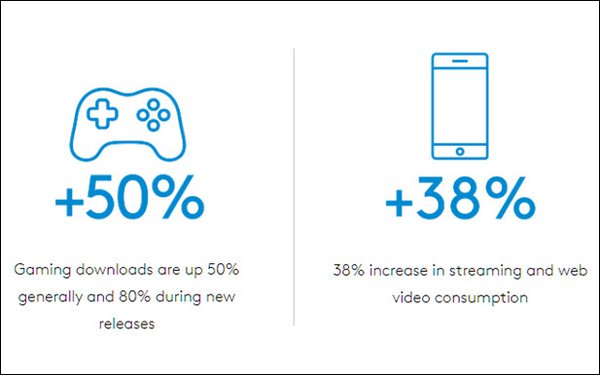 In another confirmation of the COVID-19 pandemic's effects on entertainment and work-related internet use, Comcast’s primetime network traffic increased 32% on average during March, with some areas seeing a spike as high as 60%, the company reports.

Evening and weekend use are up significantly since March 1, as users increase their television and gaming time, Comcast said, adding that the increased use is within its capacity.

Comcast, which operates the largest residential internet network in the U.S., saw linear video consumption rise by four hours, to 64 hours per week, and video-on-demand jump 25% year-over-year, to near-record highs.

It also saw a nearly 50% increase in voice remote requests for “free movies,” with voice-remote request queries reaching 50 million on some days.

Gaming downloads are generally up 50%, and up 80% during new releases. Streaming and web video consumption are up 38%.

Mobile data use over WiFi on Xfinity Mobile rose 24% in the month, as LTE data use declined 10%.

In addition, work-from-home has driven VoIP and video conferencing use is up 212%, and VPN traffic is up 40%.

However, Comcast reports that use levels are starting to plateau in areas that were among the first to be hit by the pandemic, such as Seattle and San Francisco.