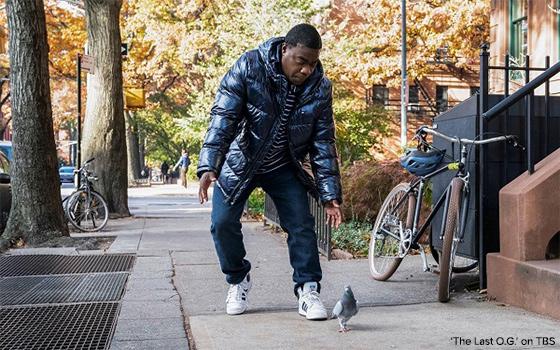 TBS did an incredible thing Sunday night that is virtually unheard of in the recent annals of basic cable: The network made it possible to actually enjoy one of its shows.

How? By not throwing up roadblocks in the form of frequent commercial breaks lasting so long that a viewer could complete any number of tasks in another room within that time frame before returning to the show without having missed a thing -- unless he or she has already lost interest.

That happens frequently while attempting to watch basic cable because the people at the networks who set up the shows and their commercial breaks have no finesse when it comes to achieving a balance between the two that won't drive off viewers.

But TBS did something completely different Sunday when it ran a marathon of half-hour episodes of “The Last O.G.” comprising the show's first two seasons, as a lead-up to this week's start of the show's third season (on Tuesday night).

This binge-watching event played more like Netflix than a basic-cable network. Not only were the commercial breaks fewer and farther between than normal, but they seemed to consist of only one or two commercials at most.

Sometimes, they consisted only of one brief promo spot and before you knew it, the show was back on.

This was such an unusual way for a basic cable network to present a show that not only was it welcome -- it was actually kind of jarring at the same time because it flew in the face of long-held viewing habits.

One result was that the episodes left a viewer completely prepared and eager for the new episodes that begin this week -- which was the whole point of this exercise. Memo to TBS: The plan worked.

In today's highly fragmented TV world, it is very difficult to remember when a favorite show is beginning or ending a new season. One reason is that entire “seasons” today can consist of just a handful of episodes -- which means that shows seem to disappear almost as soon as they arrive.

The other factor is that a show's new “season” can start up (and end) at any old time of the year (except, of course, for the fall premiere season that the broadcast networks still cling to).

Thanks to our stumbling upon TBS's “Last O.G.” marathon on Sunday, I am now fully aware that the show's new, third season is scheduled to start up this week.

Perhaps most importantly, the marathoned episodes served as a reminder that “The Last O.G.” is one of the smartest, best comedies currently in production anywhere on television.

It is Tracy Morgan's show, and he establishes himself in it as one of TV's comedic greats. He is one the rare, natural comedians whose very mannerisms and tone of voice are funny all on their own. What he does with them in this show are icing on the cake.

In the show, Morgan plays Tray, a native of Brooklyn who served 15 years in prison (from 2002 to 2017), and when he returned to his home turf, he found that the Brooklyn he once knew had become completely trendy and gentrified -- which is what really happened.

The show is about his efforts to fit in, and also to reconnect with his twin children (a boy and a girl) who he had with his ex-girlfriend, Shay (played by Tiffany Haddish).

This show is TV comedy at a very, very high level. Morgan receives top-drawer support from Haddish and other co-stars such as Allen Maldonado (as Tray's cousin Bobby), Anna Maria Horsford as his mother and in this week’s season premiere, JB Smoove, who is one of the funniest humans alive today. Keenen Ivory Wayans wrote the season premiere.

“The Last O.G.” is funny, poignant and highly creative. One episode last season borrowed liberally, and hilariously, from the old Spike Lee movie “Do the Right Thing.”

This week's premiere includes a guest appearance by fellow Brooklynite Mike Tyson that has to be seen to be believed.