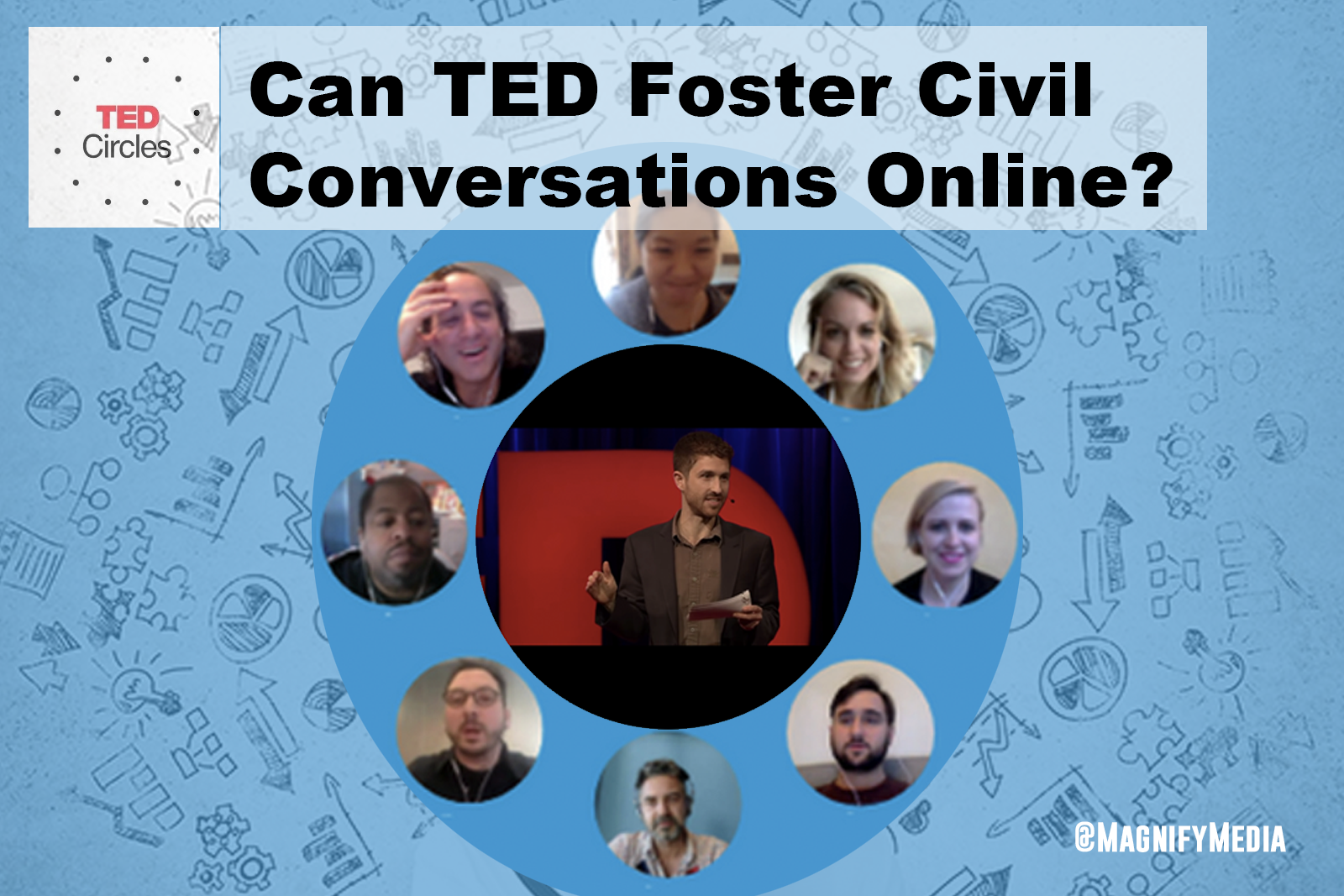 When you attend a speech in an auditorium, or talk with others at a small gathering of friends, there are social rules. People don’t interrupt, they respect each other, and the topic that generated the gathering remains the focus. At a book club, or an artist's talk, the gathering is organized around a specific theme.

On the internet, those rules mostly don’t apply. Comments that live in text below articles are often hijacked or veer wildly off-topic.

Sometimes it’s just what happens when large groups of people gather in an unmoderated space, and sometimes it’s trolls who purposely hijack the conversation and replace civil discussion with yelling and false accusations.

Internet conversations have been the Wild West, but now the folks who facilitate and curate TED Talks have dipped their toes into the world of web conversations.

Last week, I joined a gathering of strangers to discuss "who has power.”  Participants came from around the world: Spain, Mexico, U.K., U.S., and more.

The platform was carefully curated. Attendees were asked to introduce themselves and say a few words about what interests them about the topic. The order of the speakers was randomized, but the tools — audio, video, the ability to raise a hand and be called on — were all gently but effectively managed.

After the team was introduced,  a TED Talk was played. “How a handful of tech companies control billions of minds every day” was a talk that had gotten widespread notice when it was published in 2017. Today it’s been viewed more than two and a half million times.

The speaker was Tristan Harris, whom The Atlantic called the “closest thing Silicon Valley has to a conscience.” He is co-founder of the Center for Humane Technology, whose mission is to reverse “human downgrading” and realign technology with humanity.

While the talk played, all 12 of us stayed in the circle, watching and listening. Then there was a guided conversation, with the moderator, Alyssa, keeping an eye on the clock so that no one monopolized the conversation or went over the one minute-per-person per topic rule. She had the power to take back the speaker’s microphone, but that was never necessary.

The conversation could have been political, or adversarial — but that didn’t happen. It was civil, thoughtful, warm and welcoming. It was an hour, the talk we watched was 14 minutes — but it zoomed by. Everyone stayed. And as Alyssa wrapped it up, she asked people to share a conclusion that she could share with the other Circles who’d seen the same talk.

The next day she emailed a thank-you note, with these quotes from our group: ”Power is in our hands. With knowledge and self-control, we are empowered to choose (when to participate in technology, to what extent, how to rely on it, where to walk away from it) and educate others so they too are empowered and aware.”

It was an interesting group, and I’m not sure I agree with how much the group wanted to rely on self-control. Harris’ talk clearly said that platforms had a coercive ability to control behavior, but the group didn’t seem to agree with that.

That said, it was refreshing  not to be in conversation with my close group of friends who mostly agree with each other about the world's current outrages.

The program is built on a software platform here. It's an experiment, with room for fine-tuning. If the host hadn’t been so effective, I suspect it could have gone off the rails. And the decision to make the video player a circle seems more of an aesthetic than a functional one.

But those are quibbles. I like best that I didn’t know any of the other participants, and that they came from around the world. I almost wish the group could meet again, watch another TED Talk, and see how the chemistry of strangers evolves into a more nuanced conversation.

So where does this lead? TED is offering the Circles platform to individuals, schools/universities, organizations/businesses, TEDx organizers and TED-Ed clubs.Sign up to be a host here.

There's no doubt  we’re all spending more time online, as the COVID-19 pandemic requires the public to shelter at home to limit the spread of the virus.

It’s important to know that TED announced the TED Circles project back in September, looking to replace the spread of internet noise with a new form of civil conversation. The challenges of building community on the internet were already in full view.

Today, there’s new urgency as false information overwhelms facts and trusted sources in the unfiltered internet. Is TED Circles the answer? It could be one of them.