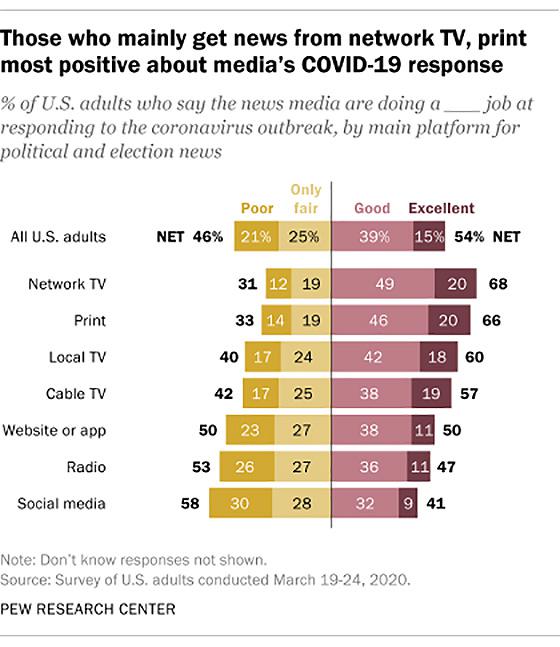 The coronavirus pandemic has dominated U.S. news since late February, when reports the outbreak had spread outside of China raised public alarms and triggered a stock-market selloff that lasted for several weeks.

Most Americans say the news media is doing a good job covering the crisis, including publishers that have suffered as many advertisers slash media spending.

Two-thirds (66%) of U.S. adults who mainly get their political and election news from print sources rated the coverage of COVID-19 as "good" or "excellent," slightly less than the 68% of people who said the same thing about network TV, according to a survey by Pew Research Center.

People who get most of their news from social media were most likely to say the news coverage about the pandemic was lacking. More than half (58%) of this group said the news media were doing a "poor" or "only fair" job at responding to the outbreak, and only 41% had a favorable view.

The positive opinion about print media may be related to consumer willingness to spend money on a subscription. Newspaper readers are more likely than other media consumers to say they pay for local news, according to Pew.

That favorable view of print media may ring hollow among news publishers cutting costs, firing workers and limiting distribution to survive the crisis.

But it's also an opportunity for publishers to showcase their strengths in providing reliable news to people hungry for information about their communities. A newspaper subscription is the best money anyone can spend, especially during a pandemic.