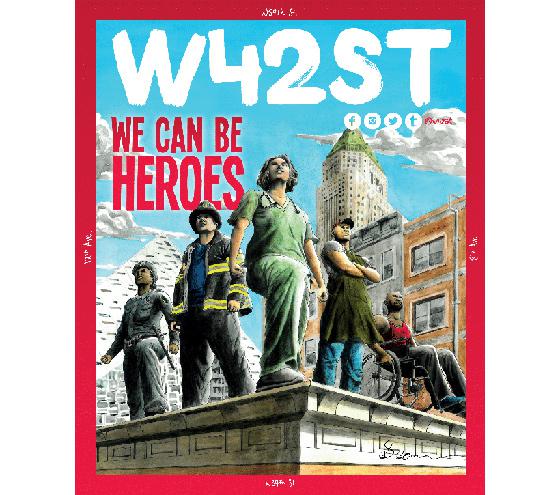 The 5-year-old Manhattan pub W42St has switched gears in the face of COVID-19.

For now, the monthly that reports on New York has gone digital-only.

The 30,000 print pub, which claims a 90,000 pass-around rate, is producing a daily online newsletter in response to the isolation felt in the Hell’s Kitchen and Broadway communities.

W42St is relevant to all New Yorkers, supplying news and features on how people are coping with the crisis. But specifically, it targets the dense West Side midtown neighborhoods, often home to those working in the theater industry.

Hell’s Kitchen, despite its name, has become a rather trendy area, loaded with interesting off-Broadway theaters, clubs and restaurants.

Magazine profiles include West Bank Café owner Steve Olsen, who survived cancer and coronavirus, to deliver meals to customers, and Dr. Amir Mortazavi, an ER physician, who had the virus, healed and returned to work.

Murat Yilmaz, owner of the popular The Jolly Goat coffee shop on West 47 St., still shows up every morning, even though his business is down 75%. “We’ve had customers paying for an extra coffee and asking us to pay it forward. We’ve had customers sending coffee and pastries to the healthcare workers at the Ryan Chelsea-Clinton health clinic," he tells W42St.

Other stories chart everything from creativity and staying sober in isolation to how residents can help homebound neighbors.

The online version is an attempt by publisher Phil O’Brien and editor Ruth Walker to remain upbeat and to keep readers connected. The duo says they expect the print version to return once New York achieves some semblance of normality.