Have A Workout, Then Pop A Michelob Ultra, Virtually -- Then Leave A Tip 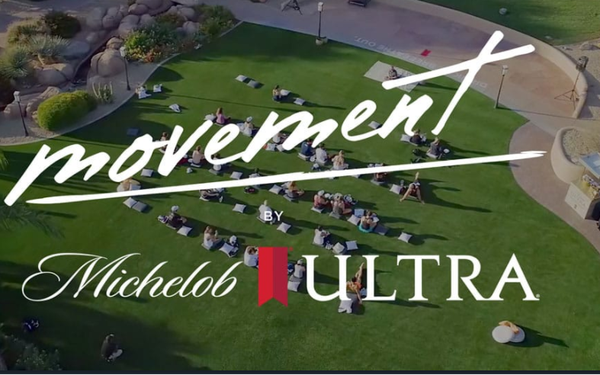 Name two activities you may have been in the habit of doing after work, that aren’t as easy to do anymore.

If your answer is “working out” and “catching a beer,” you’re likely to appreciate the “Movement By Michelob Ultra” live feature on Facebook, Instagram and YouTube. It’s a virtual workout series led by top trainers and private gym owners financially stung by the COVID-19 pandemic.

The first one is scheduled for 6 p.m. ET on Thursday, with a workout from 305 Fitness and a special DJ set from Steve Aoki, two-time Grammy-nominated DJ/producer.

It will be followed by a cool-down Q&A with training pros. That’s called a “professional happy hour” -- and is when the adult beverages come out. Since it’s your place, you BYOB. Michelob Ultra can only drop hints.

The live event is, no doubt, an improvised version of the brand’s Movement promotion, which was to begin its third year with all-day sessions featuring top workout trainers   in Chicago, Houston, Los Angeles, San Francisco and St. Petersburg, Florida this summer. (It’s not yet cancelled.)

During the live video workout session, Michelob Ultra and partner Optimum Nutrition will be circulating a Virtual Tip Jar for displaced health club employees.  The companies will match it, up to a donation of $7,500 a week for as long as the series lasts. For now, it’s scheduled for every Thursday.

Health club memberships might be threatened as out-of-work Americans try to figure out where to make cuts. That could be a lot of hurt. According to the International Health, Racquet & Sportsclub Association, there are almost 40,000 of those places nationwide that employ more than 425,000 people. Many if not most, are now idled by the crisis.  IHRSA has also petitioned Congress for relief.

“Michelob Ultra has always had strong ties to the fitness community, and we wanted to do something to help them during this time when many gyms and studios have had to close their doors, states Ricardo Marques, vice president, Michelob Ultra.

He adds that  “working out relieves the stress of this situation and brings people together over fitness and beer while we’re apart.”

Michelob Ultra earlier invited clever golfers to post Twitter videos of their best indoor golfing trick shots. The brand is donating $1 per tweet to the United Way’s COVID-19 relief efforts. Michelobs’s parent, Anheuser-Busch, will kick in a matching gift of up to $500,000 to the charity, plus a $250,000 grant.