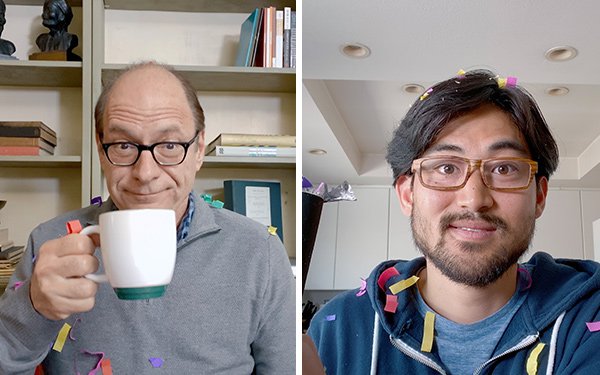 A recent BBDO San Francisco ad shoot for client ServiceNow illustrates how commercial production is adapting to the work-from-home era.

The new TV spot serves as an extension to an earlier campaign — launched in January — that showed one worker being pelted with confetti by his colleague in a traditional office space. The new creative opens on a split-screen with these same two co-workers now at their home offices as they chat about how they are adjusting to working remotely.

The spot ends on a comic note: somehow confetti still manages to break through their digital worlds.

“The spot provides a moment of levity, but it also conveys that ServiceNow’s technology enables people to stay connected and productive, anywhere in any environment,” explains Alan Marks, Chief Marketing/Communications Officer, ServiceNow.

The production itself was managed 100% remotely and the agency reports they abided by the “highest safety standards.” The final spot was shot on an iPhone 11s, shooting 4K through the front-facing camera.

The director took virtual tours of the LA-based actors’ homes and closets via FaceTime, picking out the best locations and outfits. For additional support, the agency says family members of the actors — under quarantine with them — helped with wardrobe, background dressing, and tech issues.

And, for the few items that needed to be delivered to the actors, such as microphones or external hard-drives, a producer fully sanitized each one and left them on each actor’s doorstep for no-contact delivery.

The actors set up their cameras and managed the recording, cutting, and uploading of footage to iCloud.  Built-in laptop cameras dialed into video conferencing were also used to create a low-res live preview, which allowed for fast reviews and communication. The entire process from brief to live date was about a week. The work will run on TV channels like CNBC and the Golf Network, and online.

“This unorthodox shoot is a great example of what can happen when agency, client and production partners come together and apply a little nimble creativity to whatever obstacles come our way,” says Miller.

advertising, agency
1 comment about "Commercial Production Adjusts To The WFH Era".
Check to receive email when comments are posted.
Next story loading