Life A Drag? Not Anymore With These Two New Shows 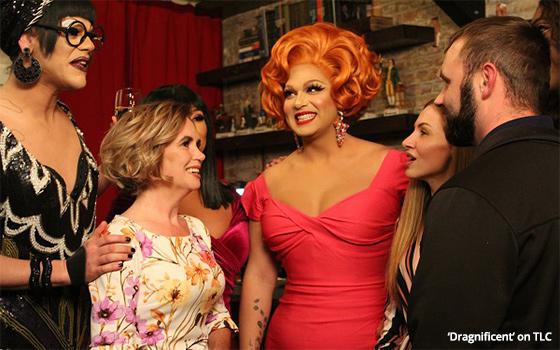 Well, judging from the debut this week of two new drag TV series, among other things RuPaul has minted a bevy of TV stars from his competition show “Drag Race.”

By sheer coincidence, seven of them are coming to TV this week -- four on the new TLC reality show called “Dragnificent!” and three of them in a new series on HBO called “We’re Here.”

Both shows will have their drag stars coaching and encouraging others in the ways and means of drag entertainment and illusion.

Each in their own way, these are both drag makeover shows whose purpose, in addition to providing entertainment for homebound TV viewers, is to inspire and empower their participants to adopt the kind of self-confidence that their drag mentors claim to have.

Judging by the way they comport themselves on both shows, the drag stars’ confidence claims are easy to believe.

In “Dragnificent!,” the four mentors take on a “Queer Eye”-ish role in the lives of ordinary women who lack confidence in their looks and in their bodies. Episode One premiered Sunday night, with the series taking up its regular time period Monday night at 10 on TLC.

In the premiere, the four drag stars helped an unladylike professional wrestler in Roselle Park, N.J., prepare for her wedding, including shopping for her wedding dress. Though they had their work cut out for them, the drag beauty coaches made sure this episode had a happy ending.

In Episode One of “We’re Here” premiering Thursday on HBO, three larger-than-life drag queens suddenly turn up in a small town -- Gettysburg, Pa., no less -- where they announce to the unsuspecting townsfolk that they intend to stage a drag show in their town.

And they will do this by enlisting the participation of some of their fellow citizens. In the episode, some Gettysburgians react negatively to these drag queens striding purposefully down their sidewalks and into their boutiques, while others readily provide welcome hugs.

As you might imagine if you have watched any of TV’s drag TV shows (of which “Drag Race” is the first and best), these seven drag queens are certainly fierce -- and also compassionate, flamboyant, loud and even imposing.

A viewer’s ability to enjoy either of these new drag shows will depend on their tolerance for people with strong personalities generally. On the other hand, introverts make for boring TV personalities. And if nothing else, these drag queens are not introverts.