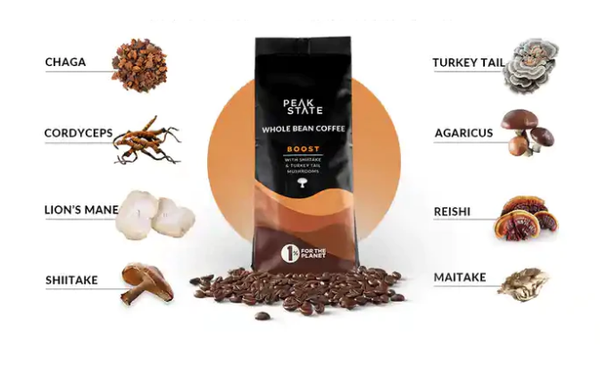 Here’s a thought most coffee-lovers have probably never had: “Why doesn’t someone infuse coffee beans with functional mushrooms?”

Enter Boulder, Colorado-based Peak State, which launched a refrigerated, ready to drink, mushroom-laced coffee line in January after selling tea containing the chaga mushroom. Chaga is a fungus that grows not out of the ground but on the bark of birch trees. Chaga mushrooms have been used for centuries as traditional medicine in regions like Northern Europe and Russia to improve overall health and immunity.

Peak State was planning to sell mushroom-infused coffee beans for hot-brewing this fall. But as COVID-19 and its accompanying stresses began to spread, the company decided to speed up the process—as founder and CEO Danny Walsh explains in this video titled “Coffee Amidst A Crisis: “We thought that coffee—especially with powerful health benefits—could be a comfort to others, too.”

On April 6, Peak State began a campaign on Kickstarter to raise $10,000 via specially priced, pre-orders of its beans before seeking retail distribution. As of today, it had raised just over $7,000.

In this interview, Walsh talks about the roots of Peak State and its ambitions.

CPG FYI: So you started out by extracting chaga into tea and bottling it?

Walsh: Yes. I went to tea tastings at local coffee shops. I would bring a sample and explain that this has existed in the Eastern world but that the Western world doesn’t really know about it.

The coffee shops would sell it as a decaf drink option on the menu. We would literally refill Mason jars just to keep things simple and minimize packaging waste. That became a cash cow that got us some funding to get off the ground.

CPG FYI: Why have you branched out beyond chaga to other types of mushrooms?

Walsh: The only way to get really powerful, nutrient-dense chaga is to wild-forage it. So there was a sustainability issue to branching out beyond chaga to grow this business. Chaga was really just the curiosity and entry point for me as a super food.

I learned about all these other mushrooms with very similar and powerful health benefits—but with different biological relationships in nature that didn’t require them to be wild foraged but could be organically farmed and grown. When you combine multiple functional mushrooms, their super-food benefits actually synergize.

CPG FYI: How did you launch your cold-brew coffee?

Walsh: It was as simple as walking into a small convenience store in Boulder and just saying, “Hey, I’m a local company and we make this cold-brew coffee with a healthy boost. Would you guys be interested in selling it? And here’s a price sheet.”

We got into six different stores by February, and [then the virus began spreading].

CPG FYI: Why did you decide tooffer mushroom-infused beans?

Walsh: The cold brew is very much traditional distribution through the food supply chain. It’s refrigerated and fragile, with a lot of seasonality. Many of our customers were demanding a hot coffee product before the pandemic came in. So we knew we could offset some of the seasonality and create a direct channel to consumers with way less middle people involved.

We wanted to launch our beans this fall, but then realized that a lot of people could benefit from having this coffee delivered to their door right now. Mushrooms calm the nervous system and boost the immune system.

CPG FYI: Who is the target audience for your products?

Walsh: We’re going after an active, health-conscious consumer who’s looking in natural channels and reads labels. They’re not a mindless consumer. They really care about organic, they care about no chemicals being in their food, and their food being real.

Walsh: No, and that’s what we’re so proud of. You keep the taste, the energy and the ritual that you love in coffee, and benefit from these functional ingredients.

CPG FYI: We’re hearing more about psilocybin—the active ingredient in psychedelic mushrooms—and its potential to treat illnesses. Is that something that interests Peak State?

Walsh: We definitely want to be experts in the domain of functional mushrooms. I don’t want people to think that we’re trying to push psilocybin right now. But we’re completely open to the power of mushrooms and how they can enrich peoples’ lives.