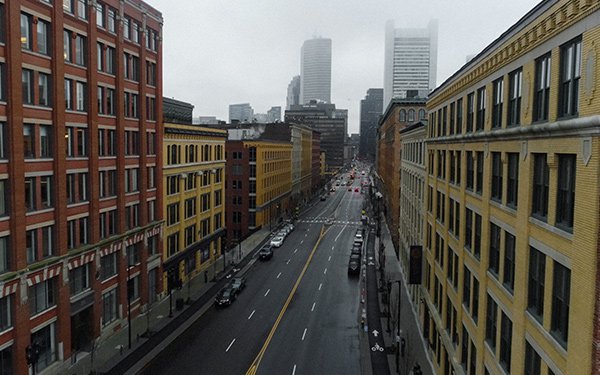 Massachusetts is one of the few states in the U.S. that recognizes Patriots’ Day as an official holiday (Maine is the other, as it used to be part of the Massachusetts) though the day is more commonly known as Marathon Monday, a day that’s quintessentially connected to Boston.

With COVID-19 forcing the postponement of the race until September 14, the Boston Globe and agency MullenLowe are introducing a tribute campaign highlighting the city’s resilience, grit, and perseverance.

The “Boston Is Still Running” campaign kicked off with a series of full-page print ads in the Globe followed by the release of a :60-second video narrated by Boston-born actor John Krasinski. He speaks about the city and its strength over images of empty streets and vacant historical landmarks.

Another:30 video, “Finish Line” provides a similarly stark, birds-eye view of the entire Boston Marathon route with no runners. A third video will debut shortly with a call-to-action seeking to support local Boston restaurants by purchasing and delivering meals to health care workers. Families are encouraged to post their own clips demonstrating how they are still “running,” whether it’s homeschooling kids, helping neighbors, jogging in their neighborhood, cooking, working from home or delivering care packages.

For each shared video with the hashtag #BostonStillRunning, The Globe will donate a meal to a healthcare worker from a local restaurant. The public can also donate through Globe.com/StillRunning to support this initiative.

The campaign came together quickly. Just over a week ago, Kayvan Salmanpour, Chief Commercial Officer of Boston Globe Media reached out to Kelly Fredrickson, President of MullenLowe Boston and New York to riff some ideas on how to celebrate the city and its essential workers in the same spirit as the Marathon spectators cheer on every runner.

The still-in-progress third video will be launched with a famous Boston sports legend voiceover.