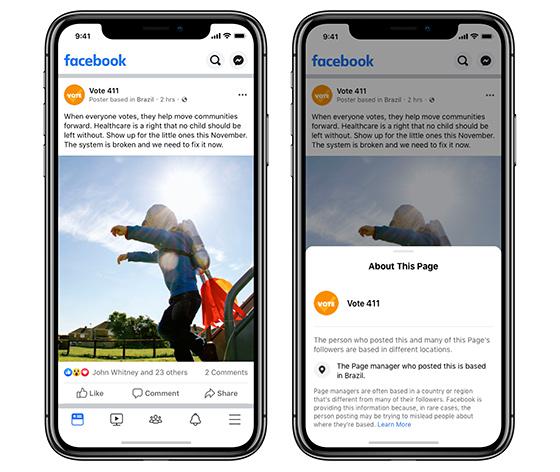 Trying to add more transparency to its content offerings, Facebook will now display the geographic positions of its most popular Pages.

“We want to make sure people … can understand who is behind the posts they’re seeing,” they said.

“This is particularly important when it comes to elections, so we’re taking extra steps to make Pages and accounts with large audiences more transparent,” they added.

Since then, the tech titan has been on a mission to better police its platform, giving users better tools to assess the quality and accuracy of content.

In 2018, for example, Facebook began adding more context about Facebook Pages, including the primary country location of the people who manage those Pages.

The company also launched an About this Account feature on Instagram in order to provide additional context for users to evaluate the authenticity of accounts.

For the moment, Facebook will be testing its latest feature in the United States and targeting Facebook Pages and Instagram accounts based outside the country, but with large U.S. audiences.

In addition to political misinformation, Facebook has recently been inundated with false and misleading content connected to the COVID-19 crisis.

In March alone, Facebook said its flagship platform displayed warnings on roughly 40 million posts related to the pandemic, which were based on approximately 4,000 articles flagged by fact-checking partners.

Despite those efforts, Facebook remains riddled with falsehoods related to the health crisis, according to a recent report from NewsGuard.

A majority of consumers have grown suspicious of Facebook and other Web giants, according to a recent study from Knight Foundation and Gallup.

Specifically, the researchers found  60% of Americans believe these companies do more to divide the country than unite it, while nearly half think they are creating more problems than they are solving.
covid-19, facebook, social media
Next story loading