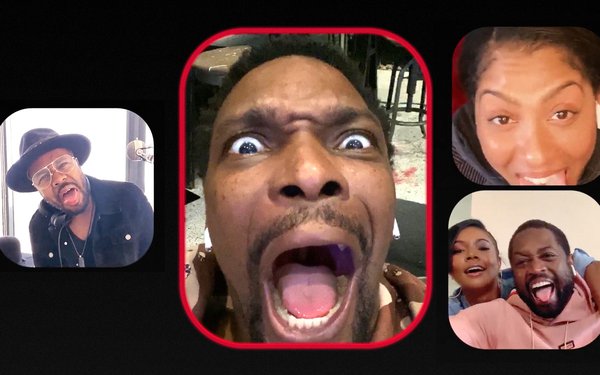 Unlike two decades ago, when “Whassup” became a buzzword with nothing but fun behind it, it’s now culturally relevant.

In this ad, celebrities are getting in touch via video calls to check in on friends and relatives, making “Whassup” at once a greeting and a health check at a time of social distancing. (And unlike 1999, the participants aren’t watching a game when they get the call. They’re “re-watching” a replay of best-of games sports networks  have been airing these days.)

Near the end of the 90-second spot, former Miami Heat superstar Dwayne Wade breaks the wise-cracking revelry and asks, “For real, though: What’s up with everybody?”

His wife, actress Gabrielle Union, leans in to press the question: “Yeah, you guys staying safe?”

Former teammate Chris Bosh replies, “Hey, thanks for asking. The family’s doing great,“ as other participants in the call, DJ D-Nice and WNBA star Candace Parker, nod in appreciation.

“Following the unbelievable success of the original ad campaign, we found this to be a meaningful opportunity to revisit the original spot’s simplicity and focus on human connection in a time when people may be feeling hopeless, uncertain, and alone,” said Monica Rustgi, vice president of marketing for Budweiser.

Budweiser partnered with the Salvation Army for this public service campaign, helping to promote a nationwide hotline the organization started this month without a ton of publicity behind it. The ad flashes information and the toll-free number as it concludes.

The ad debuted Thursday at 6 p.m. EDT on digital media. Every Thursday starting next week with Wade, Budweiser will sponsor live chats with celebrities and a chance for viewers to call in questions. Other days Budweiser will feature additional “Wassup” features.

A second ad will show up next week on digital media, where it seems Rustig means to keep it, mostly.  But she acknowledged “Wassup”  may air as a TV ad on Fox Sports at various times, and probably within ESPN’s showing of the second episode of the Michael Jordan documentary “The Last Dance” when viewed over the Sling digital platform.

But otherwise, she said in a conference call, “We never want to take this to linear TV too much.”

That means “Wassup” won’t be aired tonight, when ESPN hosts  the first night of the much-ballyhooed NBA Draft. That’s just about the highest-profile sports event since mid-March when most live sports TV stopped.

Instead Anheuser-Busch InBev seems intent to give that spotlight to its up-and-coming Bud Light Seltzer, as it tries to solidify itself as a player in the red-hot hard seltzer category.

Bud Light Seltzer is sponsoring a #BooTheCommish promotion urging fans to record themselves booing NFL Commissioner Roger Goodell, which has become a tradition (and a not-altogether-good-natured tradition) at every year’s draft proceedings. The recordings (6,000 of them so far) will be played when Goodell, alone in his basement rather than in front of a huge auditorium crowd, introduces the draft.