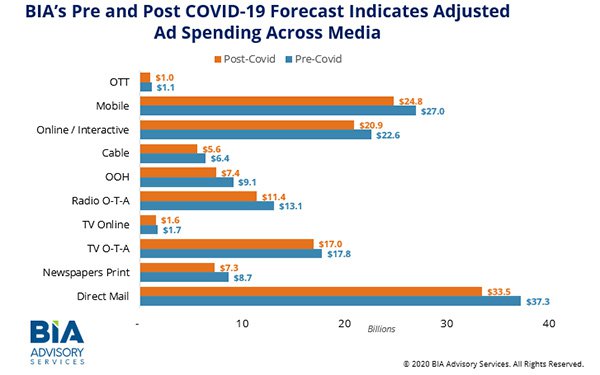 While the pandemic has yet to run its course, analysts are starting to assess the damage it has done to the U.S. economy.

With regard to local advertising, BIA Advisory Services just reduced its full-year estimate by about 10% -- from $161.3 billion to $144.3 billion.

Year-over-year, the new estimate represents a 3.6% decline in local ad spending, even though the firm anticipates an additional $7.1 billion in political advertising, this year.

Mark Fratrik, senior vice president-chief economist at BIA, remains cautiously optimistic about the local ad market’s ability to rebound toward the end of the year.

“A realistic view of the virus is that it will continue to have a negative impact on the second quarter, with some continuation into the third quarter,” Fratrik suggests in the new report.

“We have assumed there will be a strong rebound in the latter part of the year, but we will have to re-evaluate as the ongoing economic impact becomes clearer,” Fratrik added.

Among other major verticals, BIA now expects local businesses to spend $24.8 billion on mobile this year. This represents about an 8% decline, compared to its earlier estimate.

Local radio and television have also been affected by decreased ad spend by leisure and entertainment, restaurants and retail companies, as well as sports cancellations.

Likewise, out-of-home outlets have been negatively impacted by decreases in spending from leisure and entertainment companies, which are typically the biggest OOH advertisers.

Additionally, local cable systems have seen a decline as the absence of live sports has hurt viewing.

However, BIA expects local cable and local OTA television to benefit from an increase in political adverting this year.