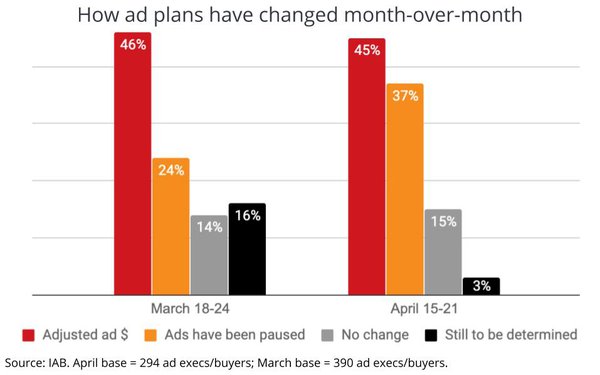 A month deeper into the pandemic crisis, the ad industry's "buy-side" has become more resolute about disrupting previous ad plans for the year. That's the finding of an Interactive Advertising Bureau (IAB) survey of advertisers and media buyers conducted mid-April vs. a comparable survey conducted in mid-March.

Roughly the same percentage (45% in April vs. 46% in March) say they have adjusted their advertising budgets -- presumably downward -- but the number that have paused ad campaigns has jumped to 37% from 24%.

Significantly, the percentage who were still taking a wait-and-see position declined from 16% in March to just 3% in April.

That finding appears to be affirmed by recent earnings reports from big digital media companies including Google and Facebook in the past couple of days showing their advertising demand is much more resilient than analysts had predicted, though much of that stability is believed to be coming from long-tail, direct-to-consumer and small and medium size businesses, not necessarily the kind of big advertisers and agencies represented in the IAB studies.