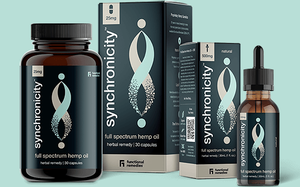 Under current FDA guidelines, it’s illegal to make health claims for CBD products that people can ingest, although this hasn’t stopped scores of companies from marketing such products.

That’s not the case with full-spectrum hemp oil. Based on more than two decades of plant breeding and testing, Synchronicity openly promotes it as a treatment for such ailments as acne, pain and insomnia, to name just a few.

In this Q&A, Carroll discusses his own education in the differences in hemp products,  and the derivation of the Synchronicity branding.

CPG FYI: How did you end up working on this project?

Tom Carroll: A friend of mine said he had made an investment in a CBD company and they wanted to talk about its branding. So I just tore the category and industry apart and read every single thing you could possibly read about CBD.

Then I spent probably two months studying the company, because I didn’t want get involved in something if it was BS or some sort of scam. There was all kinds of chatter around CBD. What I found out was these guys weren’t a CBD company.

Carroll: Once I got all of that into my head, I found the brand name Functional Remedies to sound like an apothecary or something. What do they sell? It didn’t say anything to the consumer.

So I did a whole bunch of concept testing with different brand names and propositions, along with a lot of consumer research about the wellness category.

CPG FYI: What do consumers want?

CPG FYI: Why the name Synchonicity?

Carroll: It’s because people want something that works with their body but isn’t a chemical. Hemp oil works with your body and synchronizes with it… it creates a balance and a flow. Your body is natural, hemp oil is natural.

CPG FYI: Who is the target audience for these products?

Carroll: It’s very broad. Think Soulcycle moms and Equinox dads, Whole Foods customers regardless of age. It’s people who are into wellness. Then it kind of cascades down from there to people who have specific issues.

CPG FYI: One of the new brand slogans is “say CYA to CBD.” Please explain.

Carroll: Going after CBD is going to attract attention to the category. It’s a simple conversation. The real hero of the hemp plant is the hemp oil—it isn’t just the CBD.

CBD is just dragging down the category. You’ve got a lot of hucksters buying products and slapping a label on them. They have no idea what they’re putting in the bottle. They’re just calling it CBD and selling it to gas stations and to anybody who will buy it.