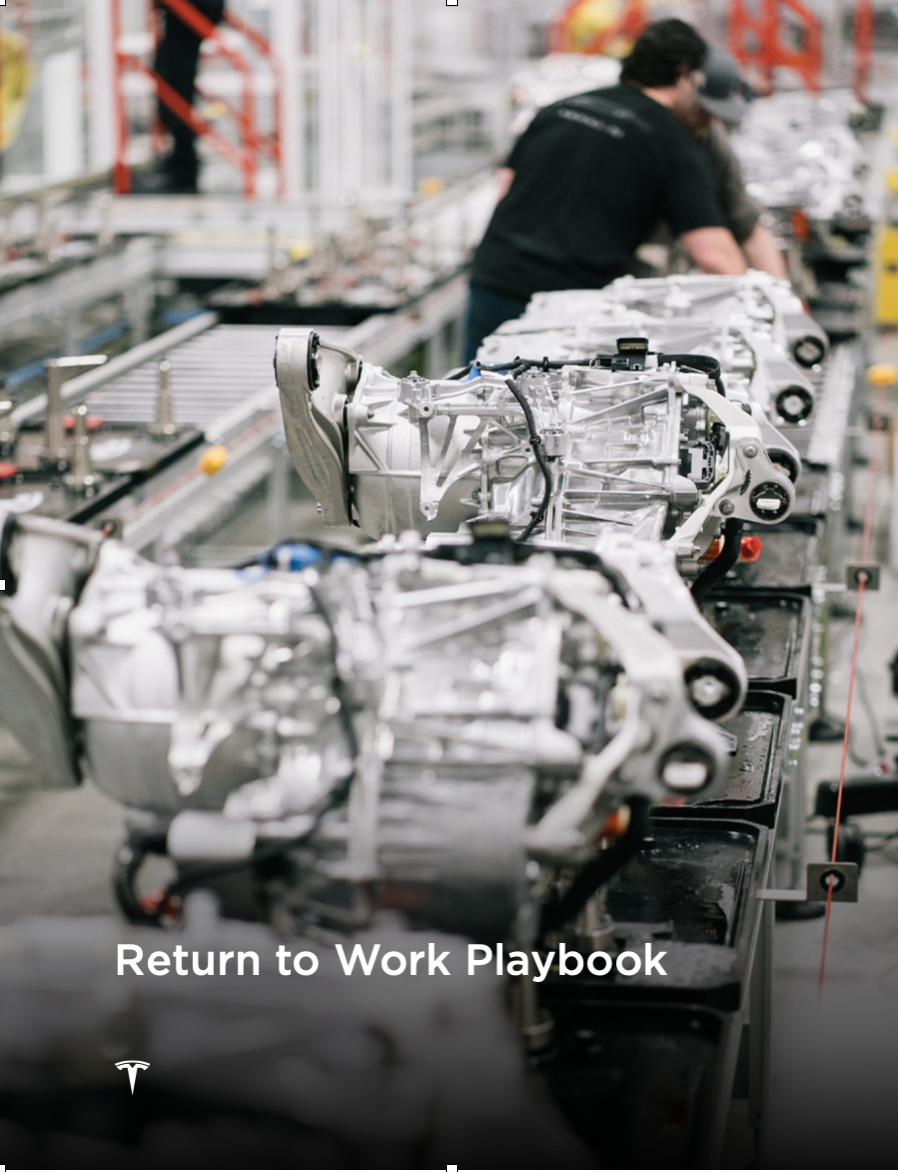 With CEO Elon Musk tweeting “If anyone is arrested, I ask that it only be me,” Tesla reopened its assembly line in Fremont, California, yesterday against an edict issued by the Alameda County Health Department. California governor Governor Gavin Newsom said on Friday some manufacturing in the state could resume, but Alameda County has not lifted its shelter-in-place order issued in mid-March and Tesla is not considered an essential business.

Musk’s pronouncement “supercharged a standoff over government orders that the company’s California plant remain closed as part of efforts to slow the spread of COVID-19 even as other parts of states are emerging from quarantines. Mr. Musk has a colorful history, but his stance was brazen even by those standards,” writes  Tim Higgins for The Wall Street Journal.

“I will be on the line with everyone else,” Musk averred.

“Shift workers were seen streaming in and out of the sprawling plant in the pre-dawn hours, filling up the employee parking lot. The company reportedly has deployed additional PPE masks and taken other measures similar to those used to reopen the automaker’s plant in Shanghai, China,” a post on CBS-affiliate KPIX’s website reveals.

“Verve, quoting two unnamed workers, said production had actually restarted on a limited basis over the weekend and around 200 Model Y and Model 3 vehicles had rolled off the assembly line,” it continues.

Fox-affiliate KTVU “received a call from a Tesla employee who said he was at work from 6 p.m. Sunday until 6 a.m. Monday. He said Tesla is ‘up and running’ and he feels like health guidelines aren’t being followed,” KTVU’s Sara Zendehnam writes.

In the end, no one was arrested and reports indicate that discussions between the authorities and Tesla were ongoing.

“At a news conference on Monday, Gov. Gavin Newsom said he thought Tesla could resume operations next week. Vehicle production stopped in Fremont on March 23 and has been on hold ever since because of Alameda County’s shelter-in-place order. Because of that, Tesla filed a lawsuit in federal court against the county for allegedly overstepping federal and state coronavirus restrictions,” Zendehnam adds.

“In a statement Monday afternoon, Alameda County said Tesla was only permitted to conduct ‘minimum basic operations’ but that officials were expecting a ‘site-specific plan’ by the end of the day as required under California’s new rules for manufacturing,” Maggie Angst, Rex Crum and John Woolfolk write  for The Mercury News.

“We addressing this matter using the same phased approach we use for other businesses which have violated the Order in the past, and we hope that Tesla will likewise comply without further enforcement measures,” the statement said.

“In email that was sent on Monday and was reviewed by The New York Times, the company’s head of human resources in North America, Valerie Workman, told employees they would be contacted within 24 hours about when to report for work…. Workman said employees uncomfortable returning to work could stay home on unpaid leave. She also said that ‘choosing not to report to work may eliminate or reduce’ eligibility for unemployment benefit,” the Timesreports.

“Musk over the weekend threatened to leave California for Texas or Nevada over his factory’s closure. His move has highlighted the competition for jobs and ignited a rush to woo the billionaire executive by states that have reopened their economies more quickly in response to encouragement from U.S. President Donald Trump,” Reuters’  Tina Bellon reports.

“Musk has discussed opening a second U.S. factory outside California in the past. In a tweet in February, he solicited comments on potentially opening a factory in Texas. Since his threat to leave California on Saturday, officials from Texas, Georgia, Utah, Oklahoma and Nevada have reached out to Musk on Twitter, encouraging him to relocate to their state,” Bellon adds.

“In its return-to-work statement, Tesla detailed the steps it’s taking to restart production and underscored it’s worked with the county and state governments to bring workers back [with] ‘health and safety in mind.’ The 38-page plan also details steps Tesla implemented at its Fremont factory from learnings at its plant in Shanghai -- the only other Tesla production plant,” Szymkowski adds.

Meanwhile, Musk’s tweet this morning observes, “all other auto companies in US are approved to resume. Only Tesla has been singled out. This is super messed up!”