TNT's 'Snowpiercer' Is Supertrain Of The Apocalypse 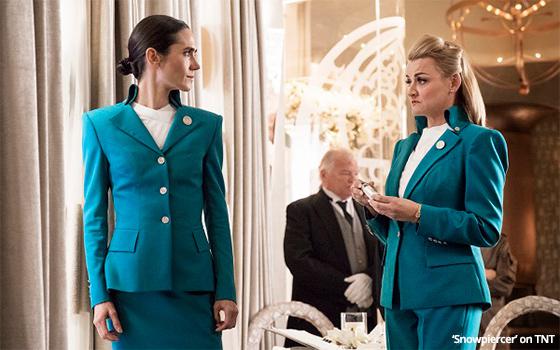 The problem with this new TNT drama, which takes place entirely on a train, is that it is easy to forget that the whole thing is supposed to be on a train while you are watching the show.

This show, “Snowpiercer,” has apparently been on a pretty slow train of its own. The TV Blog first got wind of it three years ago when it was announced (for what might have been the first time) at the Turner Networks upfront in May 2017. It finally premieres this coming Sunday.

Snowpiercer happens to be the name of the train, which would indicate that the train itself would emerge as the nominal “star” of the series.

But in the premiere episode, exteriors of the train are seldom shown, which is one of the reasons why it is so difficult to remember that everything and everyone that we are seeing is inside this vast train.

Another reason why it is so easy to forget about the train is because it is apparently the smoothest-riding train ever built. Throughout the one-hour premiere, there is not the slightest evidence of perceptible swaying or related train motion of any kind.

It is the quietest train you ever saw (or heard) too. Along with the customary jerking of train cars, you also expect to hear at least some of the sounds that all trains make, even a quiet, ultra-smooth model such as this one.

The smoothness and the quiet might be due to some sort of advanced engineering that went into this train, which consists of 1,001 cars and is supposed to remain in perpetual motion basically forever.

This is the premise of this TV show that has been adapted from a graphic novel series: A new Ice Age has plummeted the entire Earth into a deep freeze of minus-100 degree temperatures.

And now, the only survivors of this cataclysm on the entire planet are a couple of thousand people ranging from the very rich to the very poor who are now to be lifelong passengers on this futuristic, non-swaying, nonstop, super-silent supertrain.

As a matter of fact, a 1979 NBC series called “Supertrain” is notorious in TV history as one of the most expensive bombs ever produced for network television up to that time.

The TV Blog is in no way implying that “Snowpiercer” (starring Jennifer Connolly, above left) is on track to meet the same fate. Times are different today than they were in 1979.

Among the differences is that TV shows no longer need the kinds of ratings that network TV shows routinely scored 41 years ago -- even a bomb like “Supertrain.”

Today, a show such as “Snowpiercer” has every chance of attracting a sustainable following based on its graphic-novel credentials and its class-conscious, sci-fi storyline.

The series will also attract fans of the 2013 “Snowpiercer” movie starring Chris Evans and directed by Bong Joon-ho (more recently the Oscar winner for “Parasite”).

For those who are not-so-accepting of high-concept sci-fi like this, “Snowpiercer” comes across like a supertrain to nowhere.

“Snowpiercer” premieres Sunday night (May 17) at 9 Eastern on TNT.