'Celebrity' In The Title? Let The Viewer Beware 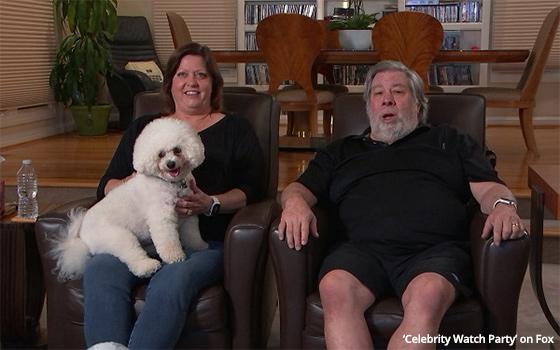 Beware of TV shows with the word “celebrity” in the title.

Long experience has taught us that such shows are among the worst creations in the entire TV canon. Two new ones are only the latest examples, although past specimens are numerous.

Of the two new “celebrity” shows, one is already on. It is a Thursday-night time filler on Fox called “Celebrity Watch Party” (8-9 p.m. Eastern) that started May 7.

In this show, so-called celebrities are seen at home in their dens or living rooms watching TV and commenting to each other about what they are watching.

So basically, you the viewer at home is now supposed to watch some other people on TV who are also watching TV -- and in effect, staring right back at you.

The above photo is from the show. It is a photo of Apple co-founder Steve Wozniak and his wife, Janet.

Gaze upon this vision of Woz and his wife relaxing at home in front of the boob tube and you get a pretty fair approximation of what it is like to watch this television show.

Except for the celebrity angle, this is not even a new idea. TLC has had a show like this since some time last year -- one of the many shows the network has spun off from its hit reality show, “90 Day Fiancé.”

On the spinoff titled “90 Day Fiancé: Pillow Talk,” various couples who have already been seen on “90 Day Fiancé” are seen relaxing at home and watching episodes of “90 Day Fiancé” featuring other couples, and commenting on them.

This show, which appears to be a one-off special (thank heaven), is scheduled to air from 8 p.m. to 9 p.m. Eastern on Thursday.

This will no doubt present a challenge for millions of home-bound Americans: Which show should they watch at 8 -- “Celebrity Watch Party” or “Celebrity Escape Room”? It’s a tough question. How about watching neither of them?

Perhaps the worst show with the word “celebrity” in its title was a short-lived reality-competition show in 2003 called “I'm a Celebrity, Get Me Out of Here.”

At the time, I remember one TV columnist as being very dismissive of that show. “I'm a TV critic,” he wrote. “Get me out of here!”

tv
4 comments about "'Celebrity' In The Title? Let The Viewer Beware".
Check to receive email when comments are posted.
Read more comments >
Next story loading